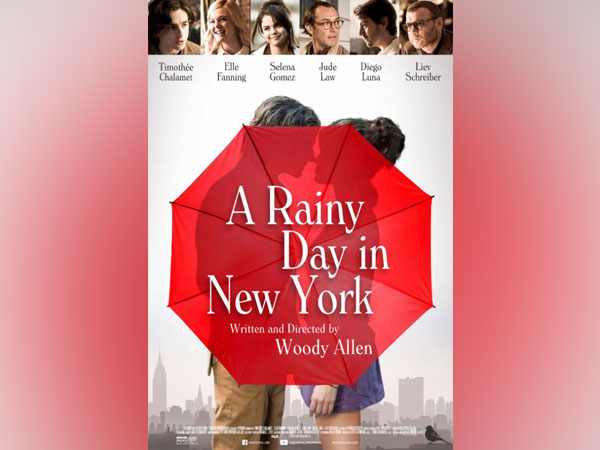 Washington [US], June 10 (ANI): Amid the ongoing major legal battle between Hollywood filmmaker Woody Allen and Amazon for 'A Rainy Day in New York', the film has been streaming on the OTT platform and even carries the Prime logo.

According to The Hollywood Reporter, the film, written and directed by the embattled auteur, is currently streaming for free on Amazon Prime, and the Prime logo on it indicates it's a title that Amazon released.
But a source has revealed that Amazon has nothing to do with the film, which stars Timothee Chalamet and Elle Fanning and marked the first of four films covered under a USD 68 million deal struck in 2017 between Allen and Amazon.
Months after that deal closed, the #MeToo era hit Hollywood and the film's stars began to publicly distance themselves from Allen, who was previously accused of molesting daughter Dylan Farrow when she was 7 years old.
Though Allen maintains his innocence, Amazon attempted to sever ties with the tarnished director and return 'Rainy Day' to him to do with what he pleased. Allen sued for breach of contract in 2019, and the sides settled later that year, though the terms weren't disclosed.
'Rainy Day' isn't the only Allen movie to raise eyebrows on a streaming platform. In February, HBO opted to keep six Allen films, including 'Broadway Danny Rose' and 'Radio Days' on its HBO Max platform, despite running alongside Amy Ziering and Kirby Dick's explosive docuseries 'Allen v. Farrow', which offered a scathing look at the director and featured never-before-seen videos shot by Mia Farrow of an adolescent Dylan recounting the alleged abuse.
"These titles will remain available in the library to allow viewers to make their own informed decisions about screening the work," HBO said in a statement at the time.
Likewise, Amazon also has several Allen films available via its library including the Kate Winslet starrer 'Wonder Wheel'. Still, the source says 'Rainy Day' shouldn't have Prime branding and Amazon lawyers are trying to rectify the situation with the film's third-party distributor, Signature Home Entertainment U.K. Alas, weeks after surfacing on the platform, the logo remains. (ANI)
ADVERTISEMENT