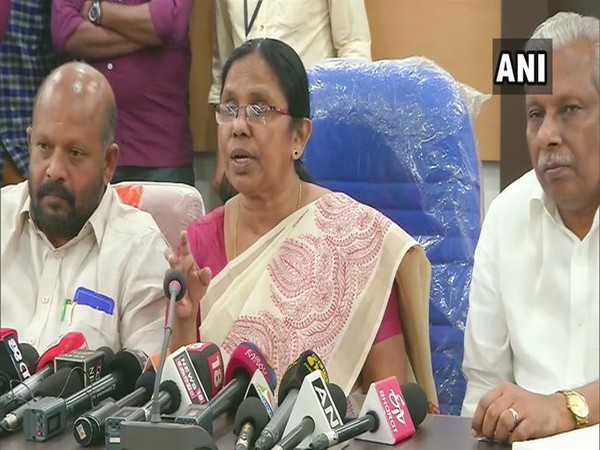 New Delhi [India], Feb 1 (ANI): Kerala Health Minister KK Shylaja on Saturday said that the cyber cell has arrested three people for spreading misinformation on social media about the deadly coronavirus that traces its origins from the seafood market in the central Chinese province of Wuhan.

A case will also be filed against those who forwarded these messages, the minister added.
The arrested persons hail from Thrissur. Meanwhile, providing updates regarding the condition of the patient found positive with the deadly virus after his return from Wuhan, the minister said, "The patient with coronavirus is stable. 69 people who were in contact with this patient have been identified. A total of 1793 people are currently under monitoring."
A total of 24 results of samples have been received from the National Virology Institute, Pune but none of them has turned out to be positive. Another five samples were sent today, she added.
"No need to be afraid," Shylaja stressed.
On Friday, the patient was shifted from Thrissur General Hospital to the isolation ward of Thrissur Medical College.
"The state is not in a difficult situation today," she said.
A total of 1793 people are currently under monitoring.
But today, an additional 322 people have been monitored. 23 people who were diagnosed with the symptoms were admitted to hospitals today. With this, the total number of people who are admitted has increased to 71, the minister noted.
A total number of 268 people have been admitted to the hospital in Kozhikode district in Kerala.
The deadly virus has claimed lives of at least 259 people and infected more than 10,000 others in mainland China. (ANI)