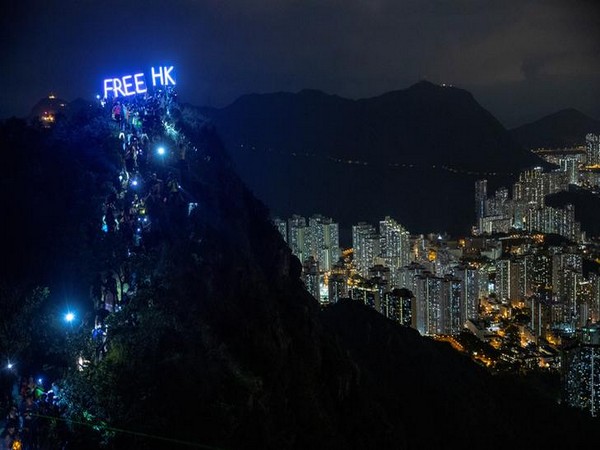 Hong Kong, Sept 14, (ANI): In an innovative peaceful protest, thousands of protesters used torches, lanterns and laser pens to light up the scenic hillsides with the message of "Free Hong Kong" during the mid-autumn festival.

The protestors also formed a human chain on the path running along the north face of the Victoria Peak, popular with mainland tour groups, and on Lion Rock, separating the New Territories from the Kowloon peninsula., Al Jazeera reported.
During the mid-autumn festival day, families traditionally gather to gaze the moon and eat mooncakes while children swing colourful lanterns from the end of sticks.
Hong Kong has been marred by protests from last three month which sometimes turned into violent unrest.
On Friday, protests also took place in various other parts of Hong kong.
"Today, there are not many here because we have an event in every district, and because this area is not a residential area. It is a working area full of offices," said Jason Liu in the Admiralty district of government offices and hotels.
Since June, Hong Kong has seen weeks of anti-government protests that began against a now-suspended extradition bill, which would have allowed criminals to be sent to mainland China for trial.
The agitations have since broadened to include calls for democracy, police accountability and the resignation of chief Lam, who is backed by Beijing.
Protesters and police have violently clashed with each other with both escalating their use of force, leading to a full-blown crisis in the Asian financial hub.
China has decried the protests and has threatened military action in the semi-autonomous city, with one Chinese official alleging that the demonstrations have "begun to show signs of terrorism".
Hong Kong functions under the 'one country, two systems' rule and was handed back to China by Britain in 1997. (ANI)