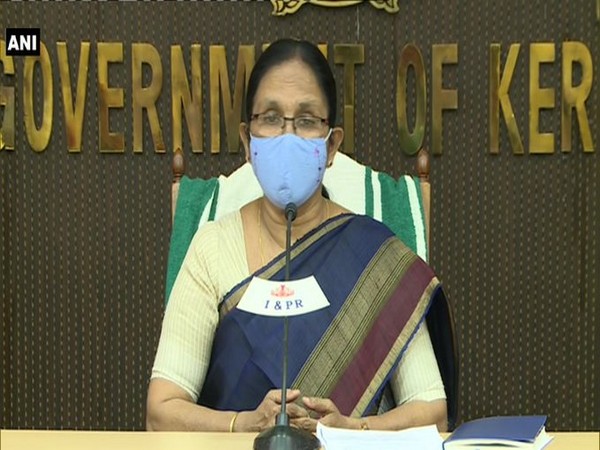 Thiruvananthapuram (Kerala) [India], August 1 (ANI): In the wake of 130 COVID-19 cases being confirmed in four old-age homes in the state, Kerala Health Minister KK Shailaja said that strict action will be taken against those who violate the COVID-19 guidelines issued by the government.

"A sister had earlier died at the Thrikkakkara Karunalayam Care Home due to COVID-19. Another death of COVID positive patient was also reported in a care home but the person was in a critical condition due to old age and illnesses. On subsequent inspections, the health department found that inmates of SD Convent Chunangamvely and Samaritan Pazhanganad were infected with the disease. As many as 95 cases were confirmed in three institutions in Ernakulam," Shailaja said.
The minister said that another 35 people, including nuns at the Shanti Bhavan in Kochuthura, Thiruvananthapuram, have been infected by the disease."It is assumed that they developed the disease from those who ventured outside and returned to the care home," she said.
According to the Minister, elderly people are the ones who get into a critical condition quickly after getting infected by a coronavirus.
"Moreover, many of them are on medication for various ailments. With this in mind, reverse quarantine is being implemented for them. In addition, the Department of Social Justice is implementing a number of schemes for the protection of the elderly. Institutions were given instructions that those living in government and private homes should not go out during the COVID period and no one should be allowed into the home from outside. However, in violation of this, some people from private homes in Ernakulam and Thiruvananthapuram came out, which resulted in the spread of the disease in care homes," she added.
If such an incident occurs, action will be taken against those who do not follow the instructions. "Arrangements have been made to contact the health department for examining those with symptoms. Only one person is allowed to leave the home for getting essential items and visitors are not allowed," said the Minister adding, "A new help desk has been set up at the Directorate of Social Justice for senior citizens as part of COVID prevention activities."
The state has 16 government old-age homes and 561 old-age homes under the Orphanage Control Board. (ANI)