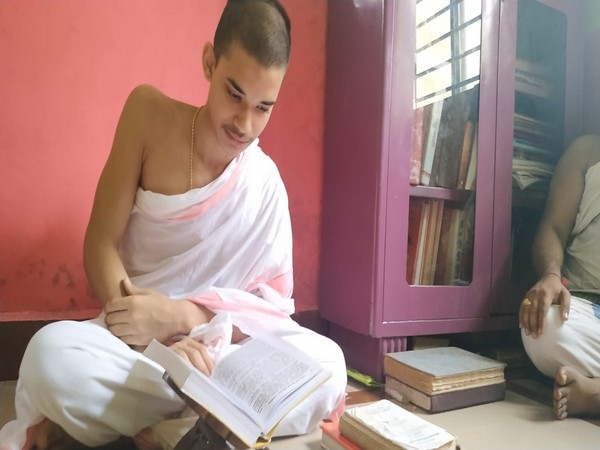 Panaji (Goa) [India], Sept 13 (ANI): A 16-year-old boy named Priyavrat has created history by becoming the youngest student to clear the 'Tenali Mahapariksha' examination.
Tenali Exams, which was conducted by the Kanchi Mutt, has evolved over time to become the prominent test for the study of Shastras in the country.

Speaking to ANI, Priyavrat thanked his teachers for the achievement. He also expressed gratitude to Prime Minister Narendra Modi for congratulating him.
"This is all because of my teachers, I used to start studying at 5 in the morning and finish by 11 in the night. I had to prepare four Granths in two months for the Mahapariksha. I feel glad that I have passed the exam and received congratulatory messages from the Prime Minister, if influential people like him are with us then more people will be inclined to take this route," Priyavrat said.
Prime Minister Modi had wished Priyavrat for his achievement. 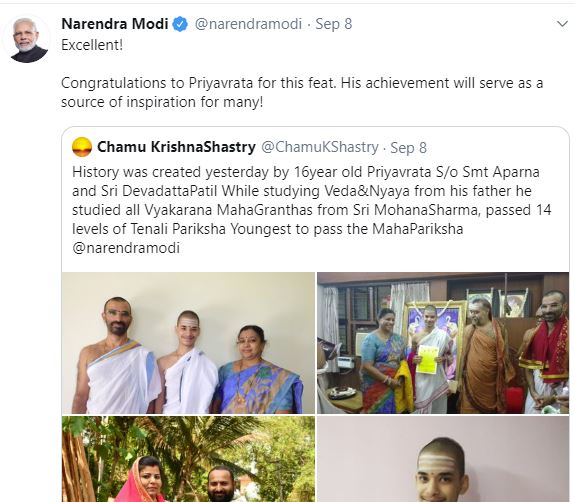 Priyavrat's mother, Aparna, who is also a teacher at a Gurukul which is also run by his father, said the credit for her son's achievement went to the Sanskrit language and expressed the hope that he could be guiding light to the fellow Indians.
"It is not just the exam that my son has passed at such a young age but it is also due to the Sanskrit language in which he studied the different Granthas. A Tamil or Marathi can claim differences over the language but everybody agrees that the Vedas, Shastras are collectively ours and so is Sanskrit. Priyavrat can be an influence on the rest of the country to come together and learn Sanskrit again so that we can make India a 'Vishwa Guru' again," Aparna said.
Speaking about his education strategy, she said, "We started teaching Shastras to him from Class 7th while we conversed with him in Sanskrit from the childhood itself. Then his guru, Mohan Shiv Narayan Sharma taught him grammar using various methods in the Gurukul."
She also mentioned that Priyavrat's father, Mahamahopadhyay Devdutt Patil, was the first one to appear for the Tenali Pariksha.
There are approximately 40 more students in the Gurukul hailing from Tamil Nadu, Goa, Gujarat and Bihar among other states.
His teacher, who is also a student of the Gurukul, hailed his concentration and commitment and said, "This is a tough exam in which there is no set pattern of questions which can be asked by the examiner. I have been teaching Priyavrat since 2013 and he is a really bright student who has proved his worth in the exams. The next exam he is going to prepare for is such that no one has appeared for it till date," his teacher named Mohanlal Shivanarayan Sharma said. (ANI)