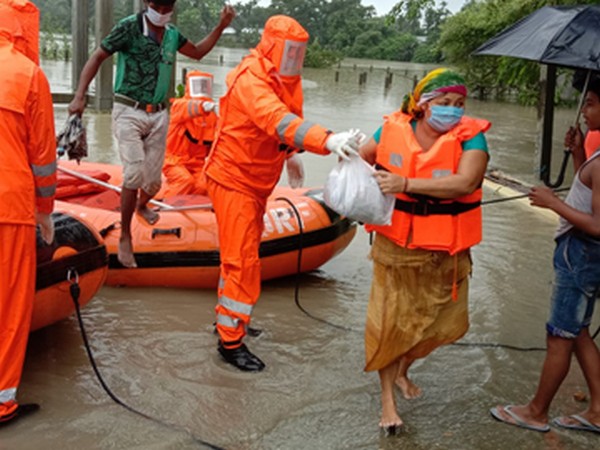 Sixteen search and rescue teams of NDRF are deployed for flood rescue operation in Assam.
Flood has wreaked havoc in several districts of Assam. A total of 107 people have died and 56,71,031 people from 5,305 villages have been affected by the floods here, a flood report from the Assam State Disaster Management Authority (ASDMA) stated on Thursday. (ANI)
"So far, a total of 30 districts have been affected in the state so far and 130 revenue circles have been affected. 56,71,031 people from 5,306 villages have felt the direct impact of the floods. A total of 107 people have lost their lives to the floods," the ASDMA report said.
It further stated, "As of 7 am on Thursday, the Brahmaputra river was flowing above the danger level at Neamatighat (Jorhat), Tezpur (Sonitpur) and Dhubri (Dhubri); Dhansiri (S) at Numaligarh (Golaghat), Jia Bharali at NT Road Crossing (Sonitpur), Kopili at Dharamtul (Nagaon), Beki at Road Bridge (Barpeta)."

Assam Chief Minister Sarbananda Sonowal on Wednesday had visited the flood and erosion hit areas. He visited the Jiadhal river site, a tributary of the Brahmaputra, where floods have caused huge damage.