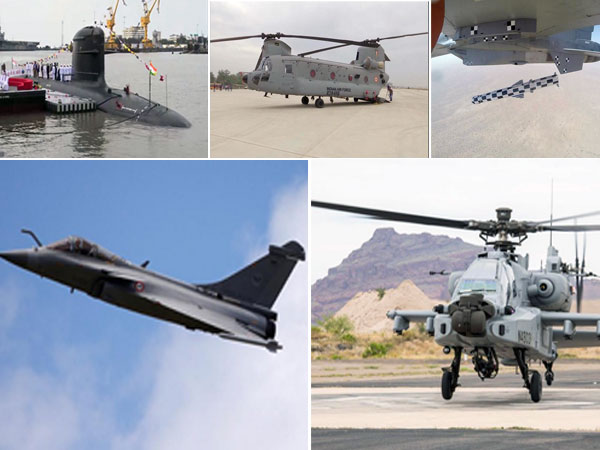 New Delhi [India], Dec 30 (ANI): The past year was game-changer for Indian military in many ways as it saw some big inductions such as of Chinook and Apache choppers, testing of anti-satellite weapon, commissioning of stealth submarine and the modernisation of infantry.

India also received Rafale jet. The three forces - Army, Navy and Air Force - acquired weapons and systems as part of their modernisation efforts.
Defence Minister Rajnath Singh commissioned indigenously-built second of Kalvari Class diesel-electric attack submarine INS Khanderi into the Indian Navy. It is a lethal addition to Navy's conventional submarine arsenal and is designed for silent and stealth sub-surface operations.
The submarine follows INS Kalvari, the first of the Scorpene-class submarines.
With a length of 67.5 meters and height of 12.3 meters, Khanderi embodies cutting-edge technologies and is equipped with an array of torpedoes, missiles, and sensors that enable her to detect, identify and destroy enemy targets.
Defence Minister also launched warship INS Nilgiri, which is the first of Navy's seven new stealth frigates.
As for Air Force, the first of the 36 French-built Rafale fighter jet was handed over to India in October this year. Defence Minister Rajnath Singh received the jet at the handing over ceremony in Bordeaux, France.
The Inter-Government Agreement (IGA) for 36 Rafale aircraft was signed between Indian and French governments in 2016.
The weapons-package includes deadly air-to-air Beyond Visual Range (BVR) Meteor missile and long-range SCALP precision-guided air-to-ground weapon.
Rafale has several IAF-specific enhancements including capability for high- altitude engine start for undertaking high altitude operations.
The Air Force also inducted eight AH-64E Apache Guardian Attack choppers in September.
Eight helicopters had been inducted into the Air Force in the first batch out of 22 procured from the US. In September 2015, IAF had signed a contract with the US government and Boeing for the Apache helicopters.
The helicopters have been customized to suit the force's future requirements and would have significant capability in mountainous terrain with the capability to carry out precision attacks at standoff ranges and operate in hostile airspace with threats from the ground.
The chopper can transmit and receive battlefield pictures to and from the weapon systems through data networking. The helicopters will provide a significant edge in any future joint operations in support of land forces.
The Apaches are equipped with hellfire missiles and rockets, with one helicopter having the capacity to carry eight such missiles. It also has a canon gun with a firing capacity of 1200 rounds at a time along with which two missile pods carrying 19 missiles each. The attack helicopter can also be used for reconnaissance.
The IAF also inducted Chinook choppers in its inventory in March.
The force also started receiving the 'building blaster' version of Spice-2000 bombs - of Balakot air strike fame - at Gwalior airbase.
The bombs were delivered at Gwalior as it is the home base of the Indian Air Force's Mirage 2000 fighter aircraft fleet and they are the only fleet that can fire the Israeli bombs.
The Indian Air Force signed an over Rs 250 crore contract with Israel with Mark 84 warheads and bombs which can destroy buildings completely.
Another big development for the Air Force came in the form of the successful firing of the air version of the BrahMos supersonic missile in May from its frontline Sukhoi-30 MKI aircraft. This was the second live launch of the weapon.
The missile with a range of close to 300 km and a speed of 2.8 Mach gives IAF the capability to strike from large stand-off ranges on any target at sea or on land with pinpoint accuracy by day or night and in all-weather conditions.
In Early December, ANI had reported that the Indian Army has started inducting its newly acquired American Sig Sauer rifles.
The Indian Army also started getting supplies of ammunition for its sniper rifles as more than 21 lakh rounds had been ordered from vendors.
Top Army sources had said that the first lot of 10,000 SiG 716 assault rifles had arrived and were sent to Northern Command, which looks after the counter-terrorist operations in Jammu and Kashmir.
India has signed an over Rs 700 crore contract to equip the Indian Army with 72,400 new assault rifles.
India in March this year also successfully tested an anti-satellite missile by shooting down a satellite that was on a low-earth orbit giving it a capability that only a few other nations possess.
In February this year, DRDO also successfully flight-tested the second indigenously developed 'Solid Fuel Ducted Ramjet (SFDR)' propulsion based missile system from ITR, Chandipur, Odisha. (ANI)