25th Amendment is zero risk to me but will haunt Joe Biden: Donald Trump 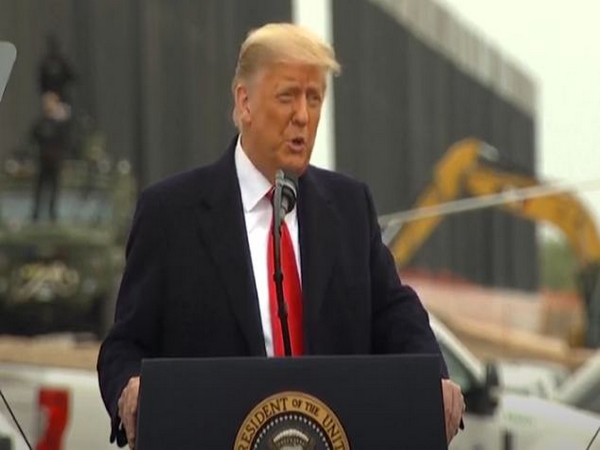 Texas [US], January 13 (ANI): US outgoing President Donald Trump on Tuesday (local time) said that the 25th Amendment poses "zero risk" to him but will "haunt Joe Biden and the Biden administration".

Trump speaking from the Mexico border wall in Alamo in Texas, in his first public appearance since his supporters attacked the Capitol.

"...The 25th amendment is of zero risk to me, but will come back to haunt Joe Biden and the Biden administration. As the expression goes, be careful what you wish for," Trump said at the beginning of his speech.

The President’s remarks come ahead of a vote in Congress that seeks to impeach him for his role in last week's riots and breach of Capitol, in which five people died. The House of Representatives is expected to vote on an article of impeachment on Wednesday.

"The impeachment hoax is the continuation of the greatest and most vicious witch hunt in the history of our country and is causing tremendous anger and division and pain, far greater than most people will ever understand, which is very dangerous for the USA, especially at this very tender time," he further said.

On Monday, the US House Republicans blocked a request by Democrats to unanimously pass a resolution seeking Vice President Mike Pence to invoke the 25th Amendment.

Speaking on the riots in the Capitol, the President said, "Millions of people watched on Wednesday as a mob stormed the Capitol and trashed the halls of government. As I have consistently said throughout my administration, we believe in respecting America's history and traditions, not tearing them down. We believe in the rule of law, not in violence or rioting."

The President who is here to review work on his border wall project said that “Free speech is under assault like never before.”

Days earlier, Trump was banned permanently from Twitter, which permanently suspended his account, following his speech last week that led to violence in the Capitol. Other social media giants like Facebook too announced that he was “indefinitely suspended” fr om the platform.

While emphasising his successes during the COVID-19 pandemic, he said, "Now is the time for the nation to heal."

During his address, he thanked the police and the immigration officials for being part of an "incredible success story" while speaking on his promise to build the 450 miles of border wall in Texas.

He said, "In every region that we have built the wall, crossings have plummeted... in the Rio Grande Valley, crossings have dropped nearly 80 per cent, in Arizona illegal entries have been slashed by 90 per cent."

Before his remarks, Trump signed a “Donald Trump” plaque mounted at the bottom of the US-Mexico border wall. He toured the wall with local Customs and Border Protection agents, the Washington Post reported. (ANI)