2nd case of coronavirus in Kerala 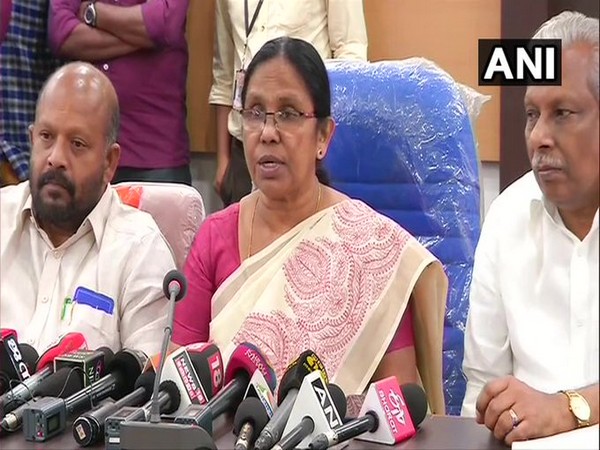 Kollam (Kerala) [India], Feb 2 (ANI): A second case of novel coronavirus in India was reported again from Kerala, the state health minister said on Sunday adding that the patient was being monitored in an isolation ward in the Alappuzha medical college.

She, however, said that the state government was waiting for results from the Pune Virology Institute.
"Patient has been admitted and is undergoing treatment at Alappuzha Medical College. We did not get the result from Pune Virology Institute. There are chances it is positive but we can confirm it only after getting the report. The patient has travel history from China," Shailaja said at a press conference here.
"The patient is stable and is being closely monitored," she added.
She further added that the Kerala government is taking extra measures to identify other victims in the state.
"Wuhan University has a majority of students from Kerala. We are finding those students and putting them under monitoring. We are putting all those who returned from China under observation," Shailaja said.
She further said that she has taken up the matter with Union Health Secretary to get the final results of the second positive case of coronavirus.
"I have demanded that the report should be given today itself. Our main efforts are directed towards saving the lives of those infected with the coronavirus," she said.
Earlier today, the Centre confirmed the second positive case of novel coronavirus disease.
The first case too had arisen from Kerala, three days ago.
The virus originated in Wuhan in December and has since then spread to various cities around the world. The confirmed cases of coronavirus in China have now surged past 14,000.
China has imposed quarantine and travel restrictions, affecting the movement of 56 million people in more than a dozen cities, amid fears that the transmission rate will accelerate as hundreds of millions of Chinese travel for the Lunar New Year.
Health authorities around the world are taking action to prevent a global pandemic as the virus continues to spread, with cases reported in Australia, France, the United States and seven Asian countries besides China.
Several countries including India have sped up the evacuation process after the World Health Organisation (WHO) declared the coronavirus outbreak as a global health crisis.
Earlier today, India evacuated 323 Indian nationals and seven Maldives citizens, from Wuhan in a special Air India flight. Earlier 324 Indians had been evacuated on Saturday too from Wuhan. (ANI)