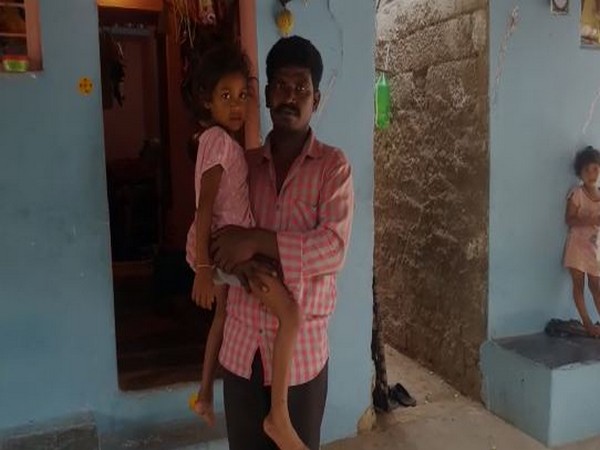 Krishna (Andhra Pradesh) [India], July 1 (ANI): A five-year-old girl who was allegedly kidnapped by a man was rescued within five hours by Nandigama Police from the clutches of accused.

The police immediately swung into action after Sambasiva Rao filed a police complaint stating that his daughter Akshara was kidnapped on Tuesday evening.
Nandigama Circle Inspector Kanaka Rao said that the complainant and accused Chandrasekhar used to work together one and a half years ago at Vijayawada.
"They know each other. Two days ago, they met again at Ibrahimpatnam and discussed the prospects of working together. At around 9 am on Tuesday, Chandrasekhar went to the house of Sambasiva Rao. They had lunch together at Sambasiva Rao's place at around 2 pm," Rao said.
"While Sambasiva Rao and his wife were engaged in some domestic work, Chandrasekhar took the girl and left from their place at around 3 pm on a two-wheeler. Parents of the girl did not check immediately as they were thinking that the girl was playing nearby. At last, they complained to us at around 6:30 pm. We immediately started searching for the girl," he said.
The police said that accused left the girl in Vijayawada.
"Meanwhile, Chandrasekhar came to know that we were searching for the girl. He went to a biryani point in Vijayawada, dropped the girl there and left that place on the pretext of bringing money," Rao said.
"Later he called us directly and said that he is the brother of Chandrasekhar and the girl is at the hotel. I immediately alerted the local police, and went from Nandigama to Vijayawada where we found the girl," he said.
The police said that accused Chandrasekhar will be traced soon. (ANI)