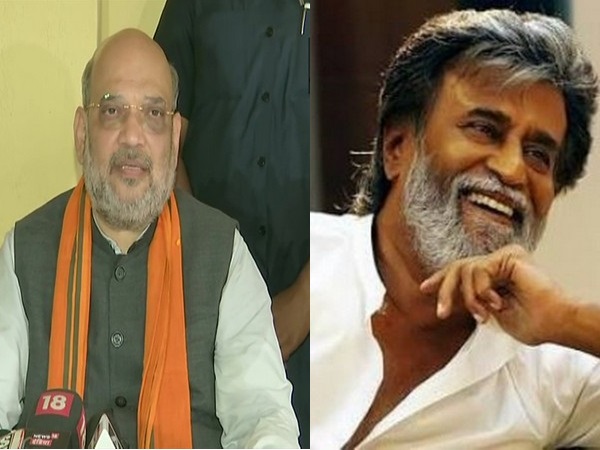 New Delhi [India], April 1 (ANI): Union Home Minister Amit Shah on Thursday congratulated megastar Rajinikanth after it was announced that he will be conferred with the prestigious Dadasaheb Phalke Award for 2019.

"Rajnikanth ji is a true legend, a versatile actor, whose acting and cinematic talent has millions of fans across the world. I join our countrymen in congratulating Shri @rajinikanth Ji for being conferred the prestigious Dadasaheb Phalke Award," Shah tweeted.
Earlier in the day, Prime Minister Narendra Modi and several others also extended congratulations to the actor from Tamil Nadu for the honour.
"Popular across generations, a body of work few can boast of, diverse roles and an endearing personality...that's Shri @rajinikanth Ji for you. It is a matter of immense joy that Thalaiva has been conferred with the Dadasaheb Phalke Award. Congratulations to him," PM Modi had tweeted.
Upon the announcement of the honour, Rajnikanth had tweeted, "My heartfelt thanks to the government of india, respected and dearest @narendramodi ji, @PrakashJavdekar ji and the jury for conferring upon me the prestigious #DadasahebPhalkeAward I sincerely dedicate it to all those who have been a part of my journey. Thanks to the almighty."
The Dadasaheb Phalke Award for 2019 should have been announced last year but was postponed because of the COVID-19 pandemic, as were the National Film Awards for 2019.
The Dadasaheb Phalke, awarded for excellence in cinematic achievement, is the highest honour in film and is awarded by the government. The recipient of the 2018 award was Amitabh Bachchan, Rajinikanth's close friend and co-star from Hum.
The 70-year-old star has featured in Bollywood as well as South Indian films and has a humongous fan following. The '2.0' star had made his debut in 1975 with K Balachander's 'Apoorva Ragangal' and has completed more than 45 years in the Tamil film industry. Rajinikanth was last seen in AR Murugadoss's 'Darbar'. Currently, he is shooting for his upcoming film 'Annaatthe'. (ANI)