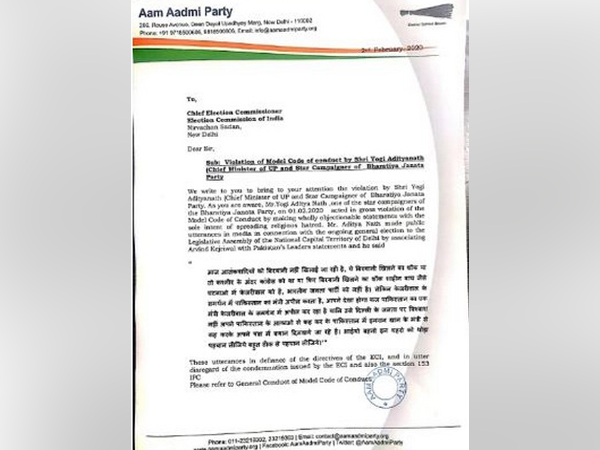 "We call upon EC to impose a ban on Yogi Adityanath's election campaign till the election is over, and register an FIR against him," AAP wrote in its letter.
"As you are aware, Yogi Adityanath, one of the star campaigners of BJP on February 1 acted in gross violation of the MCC by making wholly objectionable statements with the sole intent of spreading religious hatred. Yogi made public utterances in media in connection with the ongoing general election to the Legislative Assembly of the National Capital Territory by associating Arvind Kejriwal with Pakistan's leaders' statements," AAP added.
The letter further said BJP has "indiscriminately indulged in repeated violations of MCC" through hate speeches.
"We call upon the EC to take action against Yogi Adityanath by banning him from campaigning till the Delhi election gets over. Register an FIR under Section 153 IPC and immediately take steps to suspend or withdraw the recognition afforded to BJP in accordance with Paragraph 16A of the Symbols Order," said AAP in its letter.
Earlier today, AAP Rajya Sabha MP Sanjay Singh hit back at Yogi over the latter's remarks and called him a "manorogi" (psychopath).
He also challenged the Uttar Pradesh Chief Minister to produce the proof of Kejriwal having links with Pakistan or go to jail for making false claims against a chief minister.
"This manorogi has come from Uttar Pradesh who people call yogi baba. Since the day this manorogi has come, he has been making rubbish remarks...But there are good psychiatrists here in Delhi and we can provide free of cost treatment to him," Singh said while speaking with ANI.
Election to the Delhi Assembly is scheduled to be held on February 8. (ANI)