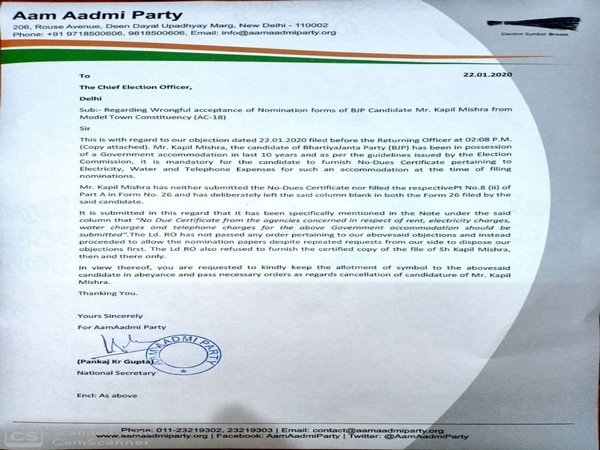 "Kapil Mishra, the candidate of BJP has been in possession of government accommodation in last 10 years and as per the guidelines issued by the Election Commission (EC), it is mandatory for the candidate to furnish No-Dues Certificate pertaining to electricity, water and telephone expenses for such an accommodation at the time of filing nominations," the letter written by AAP to Chief Election Officer (CEO), Delhi read.
"Kapil Mishra has neither submitted the No-Dues Certificate nor filled the respective No.8 (ii) of Part A in Form No 26 and has deliberately left the said column blank in both the Form 26 filed by the said candidate," the party said in its letter to EC.
AAP, through the letter, has also demanded the keep in abeyance allotment of symbol to the BJP candidate from the Model Town constituency.
"In view thereof, you are requested to kindly keep the allotment of symbol to the abovesaid candidate in abeyance and pass necessary orders as regards cancellation of candidature of Kapil Mishra," the letter read.
Delhi, which has 70 seats, is slated to go to polls on February 8. The counting of votes will take place on February 11. (ANI)