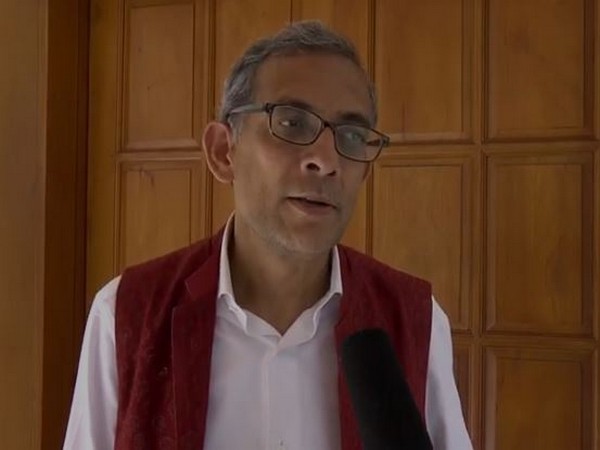 New Delhi: Nobel laureate Abhijit Banerjee received a rousing welcome at Netaji Subhas Chandra Bose International Airport when he reached the city on Tuesday evening for the first time since winning the global award to meet his mother.

He was received by Kolkata Mayor Firhad Hakim and several senior ministers of the state government.

People from all walks of life carrying posters, pictures and placards gathered at the airport to welcome Banerjee. Slogans of 'Bharater Gorbo (pride of India) Abhijit Banerjee' echoed in the airport.

Flower petals were showered on him by many who had gathered at the airport, where there was tight police security.

From the airport, Banerjee headed to his paternal home in the city, where his mother Nirmala Banerjee, an economist in her own right stays. He will leave the city in the early hours of October 24.

As he reached the apartment block in Ballygunge area, he was welcomed by blowing conch shells.

However, neighbours were excited to have a Nobel laureate among them.

"We are thrilled to have been visited by a Nobel laureate. The residents of the housing society intend to formally felicitate Banerjee whenever he visits the city again - most possibly next month. As of now, we don't want to disturb him," said one of the neighbours who identified herself as Mrs Kohli.

Basak said having a Nobel laureate as a neighbour is like getting Roger Federer at the next door.

Banerjee, an Indian-born American professor at Massachusetts Institute of Technology, has won the Nobel Prize in economics for 2019 jointly with French-American Esther Duflo, his wife and Michael Kremer of Harvard University for "experimental approach to alleviating global poverty".