After forging diplomatic ties, Bhutan, Israel to 'connect' through chess 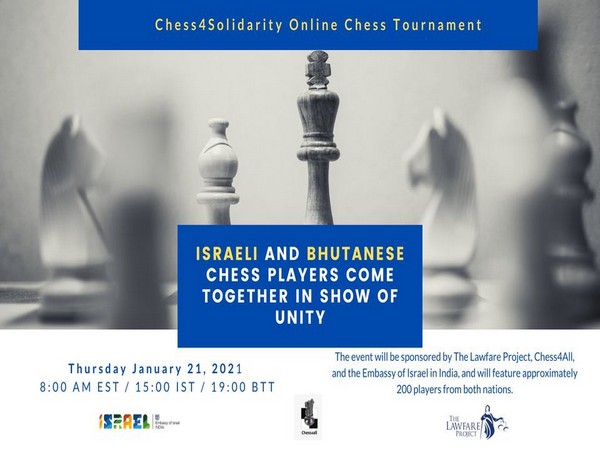 Tel Aviv [Israel], January 21 (ANI): Israel and Bhutan, under the Chess4Solidarity initiative, have organised a virtual chess competition today to connect two countries and to form solidarity between people through the game of chess.

The Chess4Solidarity initiative, organised by the Chess4All organisation, will connect Israeli and Bhutanese players and will form solidarity between people through the game of chess, reported Jerusalem Post.
"We are happy to break forth once more and hope that during the event we can expedite additional events and warm connections between the two countries," said Chess4All following the announcement of the competition.
The event is being held in coordination with the Israeli Embassy in New Delhi, which has invested a lot of effort to strengthen Israeli and Bhutanese relations.
This unique event is supported by the Lawfare Project; an organisation that helps protects Jews and Israelis around the world from anti-Semitic and prejudiced actions.
The initiative will showcase Bhutan's well-preserved culture throughout the day's competition as the event will have live commentary and interactive footage.
This will help people understand the cultures in both countries, allowing the games to reflect the recent normalisation between the two states, reported Jerusalem Post.
The two countries in December 2020 establishment full diplomatic relations. The countries agreed to formulate a joint work plan in the areas of water management, agriculture, healthcare and other areas.
The alliance between Israel and Bhutan was formulated after several years of secret talks, informed Israel's Ministry of Foreign Affairs.
The chess competition will be broadcasted live on the Twitch streaming platform wherein around 200-250 players are expected to participate.
Chess4Solidarity has held 12 international chess events with multiple countries, including Morocco and Sudan which recently signed normalisation deals with Israel, and has seen over 2,500 participants. Now, Bhutan is joining the list of countries with normalized relations with Israel that will now face off against Israeli players in the game of chess, reported Jerusalem Post.
Chile, Ecuador, Finland, New Zealand and Spain are just a few of the numerous countries with which Chess4Solidarity has collaborated in the past.
In the last decade, some players from Arab states that do not have diplomatic ties with the Jewish state have refused to play against Israelis. However, in this recent tournament, players from Lebanon, Syria and other Arab countries that do not have diplomatic ties with Israel have logged in to play, reported Jerusalem Post.
Further, on January 31, another event will be held with Chess4Solidairty in collaboration with the Israeli Consulate in New York. There will be a prize of USD 1500 that will be divided between outstanding competitors. It is estimated that approximately 400 players will participate in the competition, reported Jerusalem Post.
"This event is more than just a chess tournament. It is an opportunity to observe first-hand how nations can come together at a time when many choose not to," read the Facebook post of Chess4Solidairty. (ANI)