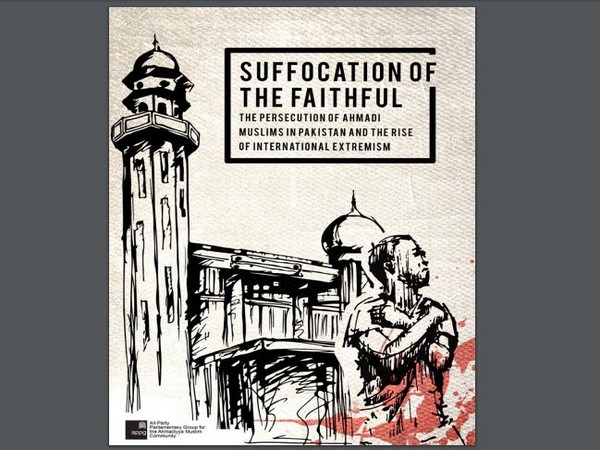 London [UK], August 1 (ANI): A 168-page report by UK-based All-Party Parliamentary Group (APPG) for the Ahmadi Muslim Community has revealed details about the discrimination Ahmadi community has been facing in Pakistan, an Islamic Republic country.

Published recently, the report titled "Suffocation of the Faithful - the persecution of Ahmadi Muslims in Pakistan and the rise of International Extremism" categorically says that persecution against the peace-loving community intensified following the partition of the Indian subcontinent and the formation of Pakistan.

It said, "Ahmadi Muslims played a pivotal role in the creation of Pakistan and supported those who considered the new country was best established as a secular state that enshrined freedom of religion. This put them at odds with radical religiopolitical movements who sought to establish Pakistan in line with their vision of a so-called Shari'ah based system of law. As such, they sought to remove Ahmadi Muslims from positions of influence and leveraged religious differences to broaden the appeal of their campaign to make Pakistan an 'Islamic' state".

"This culminated in the events of 1974 when Prime Minister Zulfikar Ali Bhutto turned the anti-Ahmadi movement into fully-fledged state-sponsored persecution. He enacted a 1974 Constitutional Amendment specifically targeting Ahmadi Muslims, declaring them 'not Muslims for purposes of law and constitution'. It was a watershed moment in Pakistan's history", said the report.

In Pakistan today, anti-Ahmadi Muslim sentiment is as strong and violent as ever.

The report narrated the most infamous event of 28 May 2010. It said, "Two Ahmadi Muslim mosques in Lahore were attacked. 86 Ahmadi Muslims and a Christian were massacred. Mobs of hundreds have attacked mosques and the grave of Pakistan's first Nobel Laureate has been desecrated and the word 'Muslim' scrubbed from his tombstone. Ahmadi Muslims have been denied the right to vote in Pakistan, and their core religious texts and websites are banned".

The APPG Inquiry heard disturbing evidence that anti-Ahmadi hatred is taught to children in schools, including in their textbooks.

The APPG also raised concern over Pakistan's National Action Plan (NAP) which came into force on 24 Dec. 2014 following the Taliban attack on an army public school in Peshawar on 16 Dec. 2014.

APPG said in its report, "This legislation was aimed at stopping sectarian hatred and extremism but it has been used by the state to target Ahmadis and other religious communities. This has profound implications, as under anti-terror legislation an Ahmadi can be arrested without notice and without recourse to bail. The penalty is a mandatory five-year sentence of imprisonment".

The APPG Inquiry also noted with grave concern how anti-Ahmadi Muslim hatred is now being exported across the globe.

"It learned of how the same pattern of anti-Ahmadi agitation, hatred and extremism has spread to other countries such as Indonesia and Algeria that has resulted in violence and persecution of Ahmadi Muslims in those countries", said the detailed report.

It added, "It also noted with deep concern how this has created a refugee crisis in countries like Thailand, Malaysia and Sri Lanka where more than 6,000 refugees are stranded awaiting resettlement despite being granted UNHCR refugee status and accepted as being vulnerable and at-risk".

The All-Party Parliamentary Group call for the repeal of anti-Ahmadi laws in Pakistan and some of its key recommendations to the Government of Pakistan include restoring the voting rights of Ahmadi Muslims, removing the publications ban on Ahmadi Muslim literature and ensure full freedom of religion for all religious communities in Pakistan. (ANI)