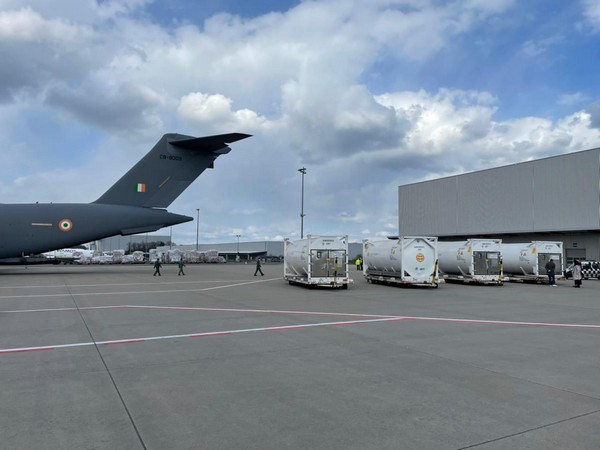 New Delhi [India], May 4 (ANI): Amid the disastrous COVID-19 wave in the country, the Indian Air Force's (IAF) C-17 aircraft on Monday returned from Frankfurt, Germany to Hindan after having airlifted four empty cryogenic oxygen containers.

As per the IAF, the airlift of 900 oxygen cylinders from Brize Norton, the UK to Chennai is in progress.
The Air Force's C-17s also airlifted eight cryogenic oxygen containers from Hyderabad to Bhubaneswar, two from Vijaywada, two from Yelahanka, two from Hindan to Bhubaneswar, and two from Bhopal to Ranchi.
Additionally, the airlift of two containers from Hindan to Ranchi, two from Agra to Ranchi, one from Lucknow to Ranchi and two from Chandigarh to Ranchi is in progress.
The Air Force's IL-76 has also been deployed for airlifting of equipment for two oxygen plants from Sulur, Coimbatore to Palam.
Several countries have extended support to India as the country is battling the second wave of COVID-19.
India registered an alarming 3,68,147 new coronavirus infections and 3,417 related deaths in the last 24 hours, informed the union health ministry on Monday morning. (ANI)