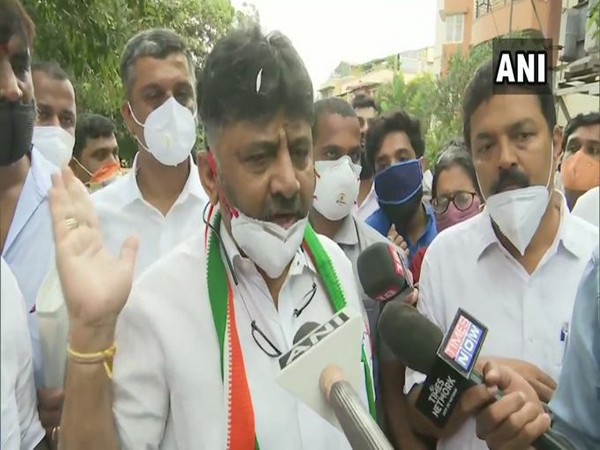 Bengaluru (Karnataka) [India], November 21 (ANI): After meeting party MLA Akhanda Srinivas Murthy on Saturday, Karnataka Congress chief DK Shivakumar said that he has listened to Murthy's plea regarding the Bengaluru riot case, saying that he will forward it to the disciplinary committee.

"I have listened to the request of MLA Akhanda Srinivas Murthy and forwarded it to the party disciplinary committee. The disciplinary committee will take appropriate action," KPCC president DK Shivakumar told reporters after talks with Murthy, who visited his residence in Sadashivanagar.
This comes after Srinivas Murthy reiterated his demand that his party should expel former Congress Mayor R Sampath Raj and Congress corporator Abdul Rakeeb Zakir, who are named in the Bengaluru riot case.
"MLA Akhanda Srinivas Murthy, who met me today, has appealed to me. I listened to his plea... Our legislators have also cast doubt on Sampath Raj. He has also issued a letter exposing him. I will deliver the letter to the party disciplinary committee," Shivakumar said.
Answering queries about Sampath Raj, who was arrested in the Bengaluru riot case, he said, "An investigation into the DG village and KG village riots is still underway. Sampath Raj's allegation is yet to be proved. All this has to be decided in court. If someone makes a statement tomorrow, can I take action based on that? Reposted that."
Further talking about the riot case, he said, "Police officers, BJP leaders and the government are working under pressure. So we know who made the statement. There is a disciplinary committee at our party. The disciplinary committee will take a closer look at the issue."
Violence had broken out in parts of Bengaluru on August 11 over an alleged "derogatory" social media post. At least three people lost their lives, while nearly 60 police personnel were injured in the incident. The police arrested around 415 accused in connection with the violence.
An FIR was registered on the complaint of Congress MLA Akhanda Srinivas Murthy at DJ Halli Police station three days after the violence broke out in parts of Bengaluru over an alleged "derogatory" social media post by his nephew, the police said. (ANI)