An eminent lawyer, Jethmalani's political life had many flavours! 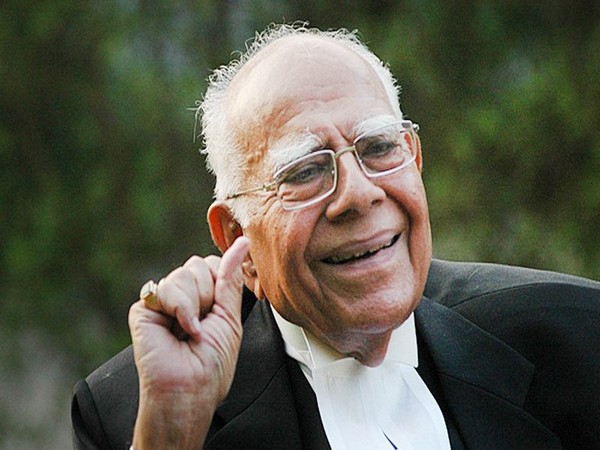 New Delhi: Outspoken, courageous, feisty and ebullient, Ram Jethmalani was one of the most eminent lawyers of the country and a politician whose political life had many flavours.

A maverick, who did not believe in mincing his words, Jethmalani had a long parliamentary inning, having been a member of the Rajya Sabha six times and of the Lok Sabha twice. He spoke with passion, interest, conviction, and clarity and his interventions were heard with rapt attention by the members.

Jethmalani, 95, fought against corruption in politics. As he was his own master, he did not always have full trust of his political colleagues. He was a sitting member of the Rajya Sabha from Lalu Prasad Yadav led Rashtriya Janata Dal (RJD).

He held the portfolios of Law and Justice and Urban Development in the NDA government led by then Prime Minister Atal Bihari Vajpayee between 1998 and 1999 and then he went on to contest against Vajpayee from Lucknow in 2004 Lok Sabha elections. He was elected to the 6th and 7th Lok Sabha on the BJP ticket from Bombay.

Jethmalani's sharpness and brilliance as a lawyer was widely acknowledged and he continued to be among the best criminal lawyer even as he became a nonagenarian. Apart from his grip over criminal law and its philosophy, he was well-versed in constitutional law and could dissect any situation with clarity.

Jethmalani moved to Mumbai after partition and built a reputation as a lawyer appearing in several high profile criminal cases including the Nanavati case. He appeared for the prosecution in the case where a Navy Commander had shot his wife's lover.

One of the highest-paid lawyers in the country, Jethmalani was unfazed when it came to taking up the unpopular cause.

He had said in an interview that he decides according to his conscience whom to defend and that a lawyer who refuses to defend a person on the ground that people believe him to be guilty is himself guilty of professional misconduct.

Jethmalani opposed the Emergency and as the chairman of the Bar Association was critical of then Prime Minister Indira Gandhi.

An arrest warrant was issued against him and when he appeared before the Supreme Court, he asked the Chief Justice whether he had heard of a country called Ghana.

He told the court that the African country had a Chief Justice who helped the country draft a draconian law and when the law came into force, the Chief Justice was the first to be picked up and for two years nobody heard about him.

Jethmalani evaded arrest during the Emergency and successfully fought the 1977 General Elections. He was elected to the Lok Sabha again in 1980.

Jethmalani started his political innings early in 1971 but lost as an independent candidate from Ulhasnagar in Maharashtra.

He had a love-hate relationship with the BJP. The party took him back in 2010 and made him a member of Rajya Sabha but expelled him later for "anti-party" activities following his remarks against party leader Nitin Gadkari.

Full of zest for life, Jethmalani used to play badminton to stay fit.

Jethmalani obtained a law degree at the age of 17 and started his career in Karachi before the partition of India. He was also president of the Supreme Court Bar Association. Jethmalani had announced his retirement in September 2017.

Born in 1923 in Sindh, Jethmalani was LLM from SC Shahani Law College, Karachi.

He was involved with social work, taught law and also served as the chairman of the weekly newspaper -- The Sunday Guardian.

The books authored by him include 'Justice: Soviet-Style', 'Big Egos Small Men', 'Conscience of a Maverick' and 'Maverick: Unchanged, Unrepentant'.
He died just six days short of his 96th birthday.