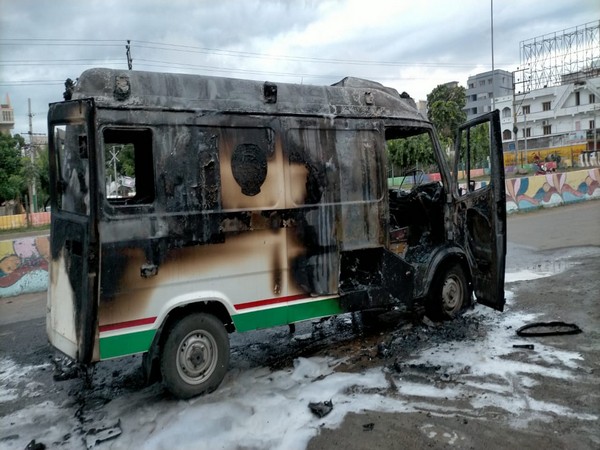 Police informed that in the early hours of Wednesday, the accused came to the police station and broke some glass and hurt himself, following which police officials called an ambulance to take him to a hospital for treatment.
"Nelaturi Suresh, who is a cobbler by profession, has a rowdy sheet registered against him. Last night, at around 2.45 am, he went to the police station on his own, and broke the glass on the walls with a knife he carried. Police tried to stop him and in this process he got injuries on his hands which started bleeding. Then, police called an ambulance on 108 to take him to the hospital," Ramesh said, while narrating the details.
While being taken to the hospital, the accused set ablaze the ambulance forcing those present in the vehicle to jump out.
"The police placed Suresh in the ambulance and they followed the ambulance on a motorcycle. After a furlong distance from the police station, Suresh collected cotton and other inflammable material in the ambulance and put it on fire at around 3.30 am. The police following the ambulance immediately opened the doors and caught him," he added.
Police further informed that the ambulance driver and technician who were in the ambulance at the time of the incident jumped out to save themselves. Later, police took the accused to Ongole Government General Hospital on their motorcycle.
The Police are filing two cases against Suresh for damaging the police station and setting ablaze the ambulance for which formalities are being completed. (ANI)