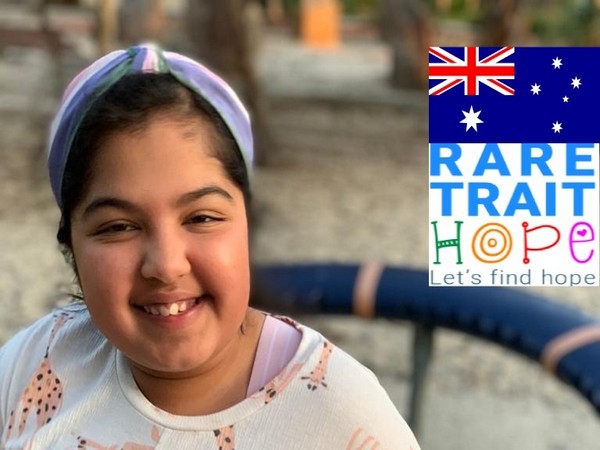 Melbourne [Australia], April 8 (ANI): Twelve-year-ago, life was going well for Indian-origin Neeraj Sawhney and his wife Vandana in Australia, they were blessed with their first kid, a baby girl. They named her Trisha.

Few years down the line they realised Trisha was unlike other kids of her age and she was a bit slow.
Her parents did not know it yet, but Trisha was beginning to show signs of one of the rarest diseases in the world, a genetic neurodegenerative disease that begins to show when children are two or three years of age, Australian news.com.au reported.
"She was our first child, she was just a happy-go-lucky girl and it wasn't until she went to kindergarten that we realised she wasn't at the same level as the other children," Neeraj said.
"They wanted the kids to check in and write her name each day, but she just couldn't do it. She couldn't recite nursery rhymes and she just wasn't as active as the other kids," he added.
At the age of 5, Trisha, now 12-year-old, was diagnosed with the disease known as Aspartylglucosaminuria (AGU), which is so rare that she is the only one in Australia to have it. Her parents suffered a devastating blow when they were told that the disease has no cure.
Only around 120 people have it worldwide, the majority of them in Finland, and it is often initially misdiagnosed as autism, according to Australian news.com.au.
AGU is an inherited disease that is characterised by a decline in mental functioning, accompanied by an increase in skin, bone and joint issues. The disease is caused by a defect in an enzyme known as aspartylglucosaminidase.
"She got the gene mutation from me and my wife, and it means that proteins accumulate in her brain, the cells will die and it will lead to early death - anywhere between 35-50 years of age," Neeraj Sawhney said.
"The doctor told us there was no cure. We were just devastated," he said.
After being told there was no cure, Neeraj and his wife have been looking at clinical trials for a new type of gene replacement therapy in the US that could potentially save Trisha's life.
If successful, the treatment -- consisting of a single injection -- could clear up the accumulation of proteins in her brain and bring back the connections that had been stifled by the disease.
"The theory is that around six to nine months later, she could have full recovery and be back to normal," Sawhney said. "She would have to start learning again from scratch, back from grade two where she was stuck with her learning."
Sawhney said he and his wife were "being positive" about the treatment because it was the only option they had to see their daughter grow into adulthood and enjoy a normal life.
"It's killing us doing full-time work, looking after two children, one with special needs and working full time, but in reality, there are only two options -- sit and do nothing, or see if this works," he said.
"Even if she makes some sort of improvement we will be happy," he added.
With a hope to receive treatment for their daughter, the Sawhneys has joined forces with eight families around the globe, from the US, Canada, Switzerland, Spain and France, to raise the $US2 million needed for the groundbreaking clinical trial that could potentially cure the disease.
According to news.com.au, people can donate to help the couple secure a spot on the trial for Trisha on Go Fund Me. (ANI)