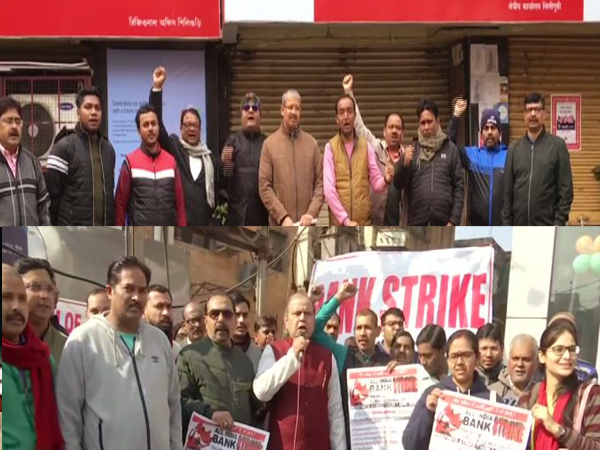 Patna/Chennai/Bombay/Kolkata [India], Jan 31 (ANI): Bank employees from across the country on Friday participated in the two-day nationwide bank strike called by the United Forum of Bank Unions (UFBU), seeking early wage revision settlement and other demands.

Several states including West Bengal, Bihar, Maharashtra, Tamil Nadu are witnessing the protests. Employees have joined the strike as the early wage revision settlement has been due since November 1, 2017.
In Patna, protesters were seen carrying placards that read, 'At the call of UFBU, All India Bank Strike' and a banner that said, 'Today the bank is on strike'.
The protesters in Patna said that their contribution to the country's economy is never considered and the government policies have failed to address their problems.
"The contribution of a bank employee is never considered in the country's economic growth. The income is not efficient enough. We had demanded an increment of 20 per cent in the salary but there has been only a 12 per cent increase in the salary. We do not see any development from the government," a protester bank employee in Patna told ANI.
"We never want to hurt the people and disturb the functioning but the policies of the government have compelled us to come down on the streets," he added.
Meanwhile, the protesting employees in Kolkata believe that the impact of the strike will last for long in the state.
"All the nationalised banks even the private banks are supporting us. The impact can be seen here as the ATMs are also shut. North Bengal has been facing a huge impact," a protestor Sanjay Das, General Secretary All India Bank Officers Confederation, West Bengal.
Similarly, bank employees in Chennai and Mumbai have also staged a protest and services at several bank branches and ATMs have been affected due to the strike.
The two-day strike coincides with the Budget Session of the Parliament, which commences today. Union Finance Minister Nirmala Sitharaman will present her second Union Budget on Saturday.
Banks will also hold a strike on March 11, 12 and 13. Also, an indefinite strike will be held from April 1.
There are several demands to hold the strike including the merger of special allowance with basic pay, updation of pension, improvement in the family pension system, five-day banking, allocation of staff welfare fund based on operating profits and exemption from income tax on retiral benefits without a ceiling. (ANI)