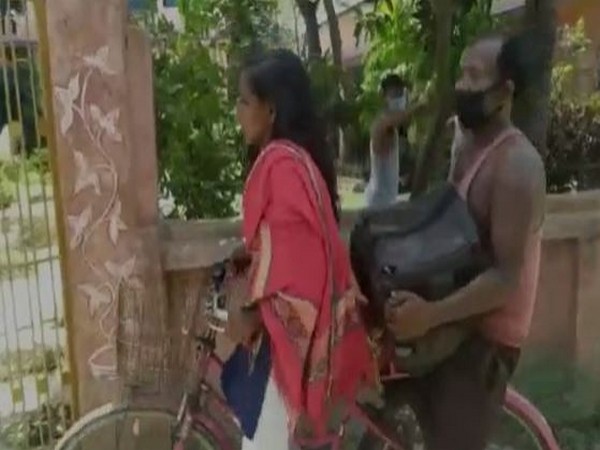 Darbhanga (Bihar) [India], May 23 (ANI): Fifteen-year-old Jyoti Kumari, who cycled with her wounded father from Gurugram in Haryana to Darbhanga in Bihar covering over 1,200 km over 7 days, has proved to the world that "where there is a will there's a way".

The feat of endurance of this lion-hearted girl has not just caught the attention of Cycling Federation of India (CFI) but also of Ivanka Trump, US President Donald Trump's daughter.
Ivanka on Friday took to the Twitter and heaped praises on Jyoti, stating that the "beautiful feat of endurance and love has captured the imagination of the Indian people and the cycling federation".
Jyoti will now be allowed to give a trial to become a trainee at the National Cycling Academy in the IGI Stadium complex in the national capital.
"15 yr old Jyoti Kumari, carried her wounded father to their home village on the back of her bicycle covering +1,200 km over 7 days. This beautiful feat of endurance and love has captured the imagination of the Indian people and the cycling federation!" Ivanka tweeted.
However, former Jammu and Kashmir Chief Minister Omar Abdullah responded to Ivanka's tweet and said desperation and poverty of Jyoti are being glorified but it is hardly something to trumpet as an achievement.
"Her poverty and desperation are being glorified as if Jyoti rode 1,200 km for the thrill of it. The government failed her, that is hardly something to trumpet as an achievement," he wrote.
A few months ago, Jyoti visited her father Mohan Paswan, who lived in Gurugram in Haryana, as he sustained injuries to his leg in an accident. After her father's leg was operated, Jyoti stayed there and decided to look after him.
However, the father-daughter duo faced severe hardship after the lockdown was imposed as they neither had money to pay house rent nor to bear travel expense to move their home. Thus, Jyoti decided to take back his father to their village on a bicycle. She left Gurugram on May 10 and arrived in Darbhanga in 8 days. Speaking to ANI about her journey and the call from Cycle Federation of India, Jyoti said: "I received a call and they told me that you have to participate in a cycle race. We will give you food and a place to live in. I told them that currently, my body is in pain as I travelled from Gurugram to Bihar. My body needs rest. But I will come there next month."
Jyoti's proud mother Fulo Devi expressed her happiness over the fact that her daughter is receiving appreciation but also shared the pain of her family who is living in abject poverty.
[{b19e668b-8d46-4573-b6c2-0988db56e0e7:intradmin/joti_mother.JPG}]
"My daughter has struggled a lot as it was not an easy step. We are happy that she brought her father home from Gurugram. We are living in poverty. If we work then only can we eat. My husband was hit by a vehicle and sustained injuries to his leg. We went there and gave him money for his treatment. Then we returned but Jyoti decided to stay there and look after him," she said.
"We got a call from Delhi. Jyoti is saying she will go there for her trials. I am very proud of her. We never dreamt of such a thing. People in large numbers are coming to congratulate us. From District Magistrate to several public representatives have honoured her," she added.
People on social media have shown lot of support to Jyoti and compared her to the character of Shravan Kumar from the epic Ramayana, who took his blind and disabled parents on a pilgrimage with his mother and father seated in baskets hanging at the ends of a pole he carried on his shoulders. (ANI)