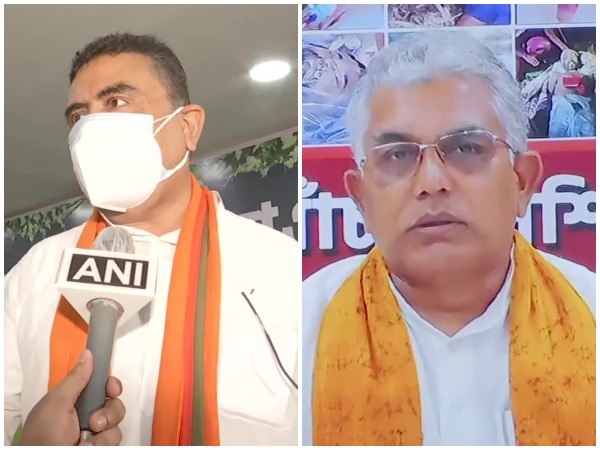 By Ujjwal Roy And Lalit Kandpal
Kolkata (West Bengal) [India], July 21 (ANI): After West Bengal Chief Minister Mamata Banerjee slammed the central government over the ongoing Pegasus controversy and said she had plastered her phone, the state BJP launched a counter-attack and accused the state government of resorting to phone tapping.

Leader of Opposition in West Bengal Assembly Suvendu Adhikari accused the West Bengal government of tapping his phone along with that of other BJP leaders.
"The leader of Bengal violence is Mamata Banerjee and her government. Mamata Banerjee's administration is tapping my phone. There is no opportunity to speak, except on FaceTime and WhatsApp. Her administration is tapping phones of BJP workers," Adhikari said.
West Bengal BJP chief Dilip Ghosh went a step further and alleged that Banerjee was tapping phones of her party colleagues "using Pegasus spyware".
"TMC leaders do not communicate except for messaging on WhatsApp, as they know that Mamata Banerjee herself taps their phones. She and her government use Pegasus software," Ghosh alleged.
"Phone tapping is not BJP's work, but rather that of Congress from where Mamata has come," he alleged further.
Banerjee had earlier in the day slammed the BJP-led central government over the Pegasus surveillance controversy and pitched for opposition unity against the threat to democracy.
Accusing the BJP of "bulldozing the federal structure" of the country, Banerjee said she has plastered the camera of her phone.
"Our phones are tapped. Pegasus is dangerous and ferocious. I cannot talk to anyone. You are paying too much money for spying. I have plastered my phone. We should also plaster the Centre otherwise country will be destroyed," she said. (ANI)