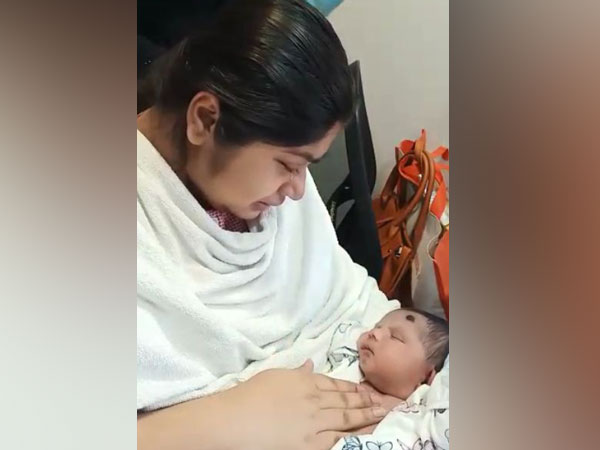 By Syeda Shabana Parveen
Howrah (West Bengal) [India], June 10 (ANI): Tears could not stop rolling down the cheeks of a 25-year-old doctor when she held her first newborn child for the first time after defeating COVID-19.

Dr Arfa Sajadin, who had contracted the infection when she was 37 weeks pregnant, was put on a ventilator at Howrah's ILS Hospital just three days after the delivery.
Dr Kaushik Naha Biswas, Critical Care Consultant, ILS Hospital said that Dr Arfa developed disseminated intravascular coagulation and had to be put on a ventilator for 10 days.
"25-year-old doctor Arfa Sajadin had been put on a ventilator. The doctor was 37 weeks pregnant when she was infected and had very poor glycemic control (a medical term referring to the typical levels of blood sugar (glucose) in a person with diabetes mellitus). Looking at her condition, a Caesarian operation had to be performed on her" Dr Biswas told ANI over the phone.
"Everyone had lost hope. She stayed on mechanical support of ventilator for 10 days and despite various complications and lung infection, she finally defeated the virus," he said.
Dr Biswas said that Arfa's baby had tested negative for COVID-19.
Disseminated intravascular coagulation (DIC) is a rare but serious condition that causes abnormal blood clotting throughout the body's blood vessels. It is caused by another disease or condition, such as an infection or injury, that makes the body's normal blood clotting process become overactive.
While the 25-year-old was being treated at the ICU, doctors used to motivate her
"We used to talk to Arfa and tell her that she is a fighter and should not give up. Your baby is waiting and finally, she defeated the virus," added Dr Biswas. (ANI)