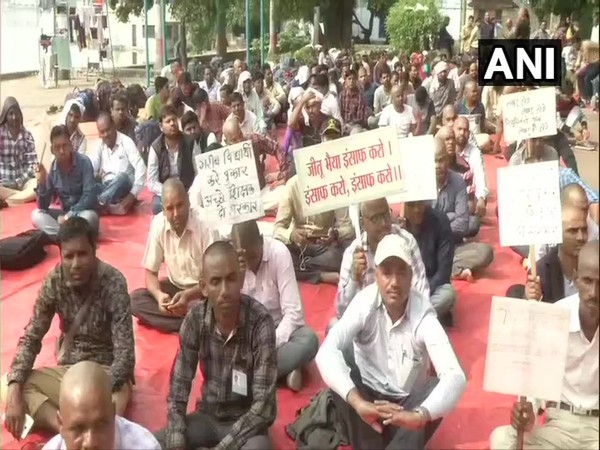 Bhopal (Madhya Pradesh ) [India], Dec 3 (ANI): Around 21 assistant professors, who had qualified the Madhya Pradesh Public Service Commission (MPPSC) exam 2018, on Monday sat on an indefinite strike at Bhopal's Neelam park alleging that they have still not received an order of appointment.

As many as 3,000 protesters sat on the protest and raised slogans against the MPPSC for delaying the appointment of selected candidates.
"We will not move from here until we get the order of appointment. We are very poor and we are very distressed. We worked hard for our education and cleared the exam. The government should understand this. Our parents look at us with a lot of hope, what do we do?" one of the protesters said.
They all carried out the pad yatra from the Mhow in Indore district to Neelam Park in Bhopal. They reached here on Sunday night.
The protesters said that they have brought copies of the Constitution, which they will give to the Higher Education Minister and the Chief Minister of the state.
In June 2018, an advertisement was published regarding the vacant posts and the examination was conducted.
The MPPSC had ordered the appointment of 10 percent of people, who have cleared the exam. However, the protesters sitting on the dharna asserted that their demonstration will continue until everyone is appointed. (ANI)