Biden labels gun violence in US as 'international embarrassment' 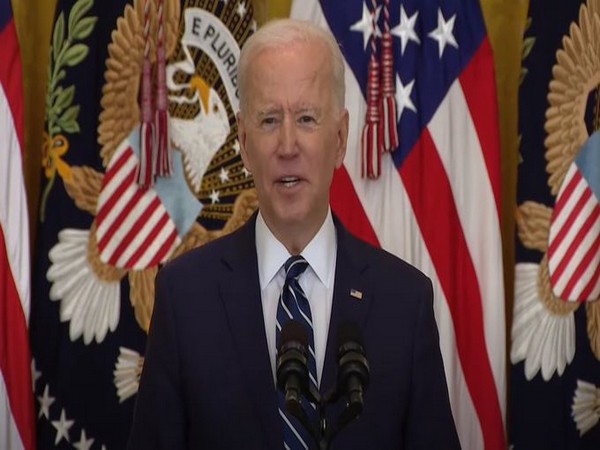 Washington [US], April 9 (ANI): After a recent spate of high-profile mass shootings in the United States, President Joe Biden unveiled a package of moves Thursday that seek to address a scourge of gun violence he deemed a "blemish on the nation."

"We got a long way to go. It always seems like we always have a long way to go. Today, we're taking steps to confront not just the gun crisis, but what is actually a public health crisis," Biden said during his address.
"Gun violence in this country is an epidemic. Let me say it again: Gun violence in this country is an epidemic, and it's an international embarrassment," he added.
According to CNN, the executive actions -- which Biden repeatedly argued did nothing to impinge on the Second Amendment right to bear arms -- include efforts to restrict weapons known as "ghost guns" that can be built using parts and instructions purchased online.

During his address, the President acknowledged the persistent struggle in convincing Washington to act on a seemingly intractable issue and insisted that lawmakers must break the pattern.
"They've offered plenty of thoughts and prayers -- (by the) members of Congress -- but they've passed not a single new federal law to reduce gun violence. Enough prayers. Time for some action," he said.
"I believe the Senate should immediately pass three House-passed bills to close loopholes that allow gun purchases -- purchasers to bypass the background checks. The vast majority of the American people, including gun owners, believe there should be background checks before you purchase a gun," he added.
Biden said stripping gun manufacturers of liability protection would be at the top of his list of legislative priorities on gun control. "The only industry in America, a billion-dollar industry, that can't be sued," he said. "Imagine how different it would be if that same exemption had been available to tobacco companies?"
"Nothing I'm about to recommend in any way impinges on the Second Amendment... They're phony arguments suggesting these are Second Amendment rights at stake with what we are talking about. But no amendment, no amendment to the Constitution is absolute," he added.
According to The Hill, Biden directed the Justice Department to propose rules to make "ghost guns," homemade weapons without a serial number that are more difficult to track, subject to background checks; to propose model "red flag" legislation for states that could help law enforcement keep firearms out of the hands of potentially dangerous individuals; and to reclassify pistols modified with stabilizer braces to be subject to the National Firearms Act.
The Department of Justice is also expected to issue a report on gun trafficking for the first time in years, and five federal agencies will be directed to focus grant programs more on community-based gun violence intervention. Biden is set to nominate David Chipman, a gun control advocate, to lead the Bureau of Alcohol, Tobacco, Firearms and Explosives (ATF). Chipman worked as an ATF agent for 25 years.
Biden framed the need for action as urgent, repeatedly calling the steady drumbeat of mass shootings in the US an epidemic. He pointed to recent mass shootings in Atlanta; Boulder, Colo.; and one this week in South Carolina that left five people dead.
"This is an epidemic for God's sake, and it has to stop," he said. (ANI)