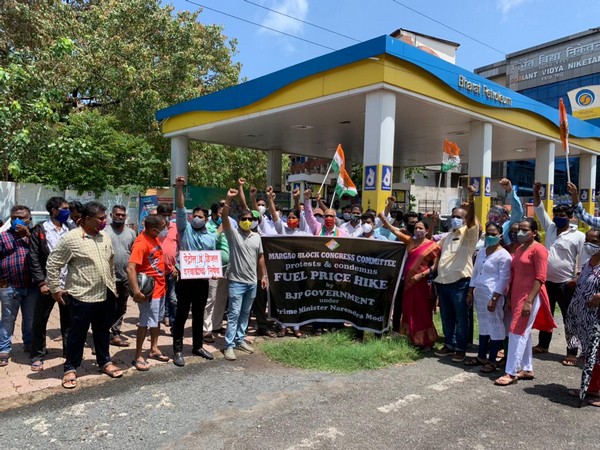 Margao (Goa) [India], June 11 (ANI): Former Goa Chief Minister and Leader of Opposition Digambar Kamat on Friday slammed the BJP government over the fuel price hike and said that consistent hike despite the International Oil prices coming down is a clear indication that people's hard-earned money is being looted.

"BJP Government came to power in Goa in 2012 by promising to cap the petrol prices at Rs 60 per litre. They promised "Acche Din" to the people of the country after coming to power at the Centre in 2014. Unfortunately, both the state as well as the Centre has not kept up with their promises. The consistent fuel price hike despite the International Oil prices coming down is a clear indication of loot from people's hard-earned money by the BJP Governments," said Kamat.
Kamat said that the BJP Government must immediately roll back the fuel prices.
"It is most unfortunate that the insensitive BJP Government is continuously putting additional burden on the people by increasing the fuel prices when people are passing through bad times due to Covid pandemic. We demand that the BJP Government must immediately roll back the fuel prices," he said.
He further alleged that the government is not ready to give the financial package to the marginalised Sector which has suffered the most due to nationwide lockdown and curfews imposed to control the Covid pandemic.
"BJP Government is putting additional burden on daily wagers like motorcycle pilots, khajekars, chanekars, flower vendors, mechanics, bakers and other traditional occupationists of Goa,"Kamat said.
Kamat protested at Margao against the rising fuel prices with members of South Goa District Congress Committee at Mohiddin Petrol Pump, Goa Pradesh Youth Congress Committee at Kurade Petrol Pump and Margao Block Congress Committee at Virginkar Petrol Pump.
Former Minister Alex Sequeira, South Goa District Congress President Joe Dias, GPCC Secretary Nitin Prabhudessai, SGDCC Members Deepak Kharangate, Avita Naik, Royla Fernandes, Goa Youth Congress General Secretary Archit Naik and Deepak Pai, South Goa District Youth Congress President Ubed Khan, Margao Block Congress President Gopal Naik, were also present during the protests.
Vice-Chairperson of Margao Municipal Council Dipali Sawal, Councillors Lata Pednekar, Damodar Varak, Siddhant Gadekar, Sagun Naik, former Councillor Avinash Shirodkar and Manoj Masurkar were also present and participated in the protests.
"Today, each and every household budget has collapsed due to misplaced priorities of the BJP Government. The rising LPG Cylinder prices have affected every housewife and working women. We demand that BJP Government must hear the plight of the women," said MMC Vice-Chairperson Dipali Sawal while speaking at the protests.
GPCC Secretary Nitin Prabhudessai said that the irresponsible BJP Government has completely failed in providing help to the people when the entire economy has collapsed. They have no action plan to help the needy and on the contrary, are burdening the common man.
Congress workers had gathered in large numbers at all the three venues in Margao and participated in the protests. Similar protests were organized in various constituencies all across the State.
Congress is holding a nationwide "symbolic protest" in front of petrol pumps today across the country against rising fuel prices. (ANI)