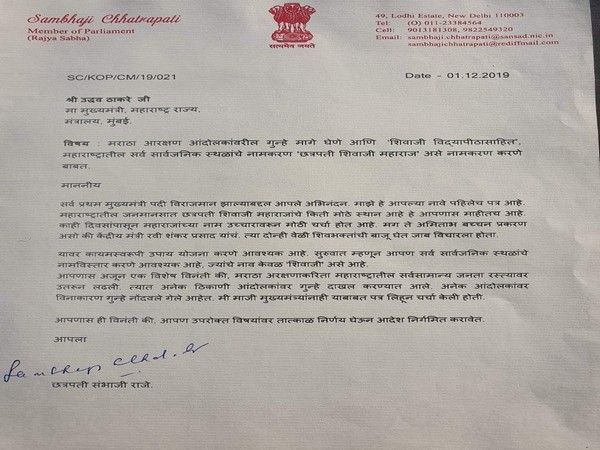 In the letter dated December 1, Chhatrapati also urged the Chief Minister to rename public places in the state after Chhatrapati Shivaji Maharaj.
Sharing the letter on Twitter, he wrote in Marathi: "I have written a letter to the Chief Minister demanding immediate withdrawal of FIRs registered against the people involved in Maratha reservation movement and to rename 'Shivaji University' and all other public places in the state as 'Chhatrapati Shivaji Maharaj' (eg, Chhatrapati Shivaji Maharaj University, Kolhapur)."
This comes after Nationalist Congress Party (NCP) MLC Prakash Gajbhiye on Tuesday wrote to Thackeray seeking withdrawal of cases filed against Dalits in Bhima Koregaon violence.
So far, Thackeray has withdrawn cases against the activists who protested against the Aarey metro car shed and protestors of the Nanar Refinery project. (ANI)