Blinken defends US withdrawal from Afghanistan, says staying would have 're-upped the war' 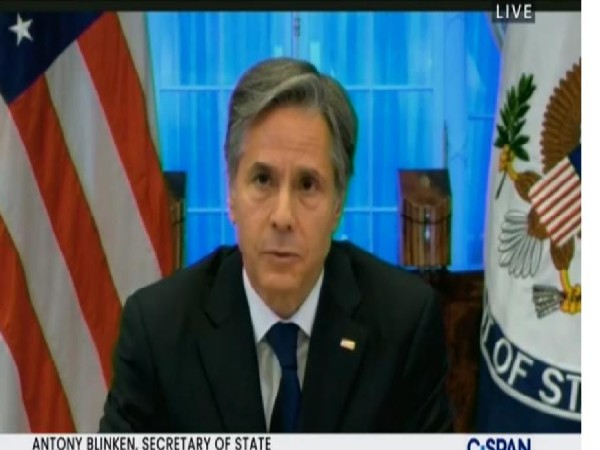 Washington [US], September 14 (ANI): Staunchly defending America's withdrawal from Afghanistan, US top diplomat Antony Blinken on Monday said that staying in the war-torn country would have "re-upped the war for another five, ten or twenty years."

During his testimony in Congress, Secretary of State Blinken said: "The agreement reached by the previous administration required all US forces to be out of Afghanistan by May 1. Had the President not followed through on the commitments that his predecessor made, those attacks would have resumed."
This was his first testimony before Congress since the Taliban took control of Kabul.
The top US diplomat laid out the Biden administration's posture toward the Taliban in remarks to the House Foreign Affairs Committee.
Afghanistan plunged into crisis last month after Kabul fell to the Taliban and the democratically elected government of former President Ashraf Ghani collapsed. The United States was blamed for the hasty withdrawal that led to the collapse of the Afghan security forces.
Secretary of State Antony Blinken said even the most "pessimistic assessments" of the situation on the ground in Kabul, Afghanistan, did not predict that "government forces in the city would collapse while US forces remained," during his congressional testimony.
"As General Milley, the chairman of the Joint Chiefs of Staff has said, 'Nothing I or anyone else saw indicated a collapse of this army and this government in 11 days,'" Blinken noted.
Blinken continued: "Nonetheless, we planned and exercised a wide range of contingencies. Because of that planning, we were able to draw down our embassy and move our remaining personnel to the airport within 48 hours. And the military - placed on stand-by by President Biden - was able to secure the airport and start the evacuation within 72 hours."
Secretary of State Antony Blinken said the Biden administration "inherited a deadline, we did not inherit a plan," referring to former President Trump's May 1 deadline for the US to withdraw from Afghanistan.
Blinken acknowledged that a lot of people "don't know" the agreement the Trump administration made about Afghanistan before President Biden took office in January.
"I recognize that a lot of people don't understand that, don't know the agreement that was reached, and the choice that President Biden faced for May 1," Blinken said.'
President Biden in remarks last month said he takes responsibility for the decision to withdraw at the end of August, but he also blamed his predecessor for signing on to an earlier agreement with the Taliban for a US withdrawal on May 1.
"My predecessor, the former President, signed an agreement with the Taliban to remove US troops May 1, just months after I was inaugurated. It included no requirement that the Taliban work out a cooperative government arrangement with the Afghan government," Biden said. (ANI)