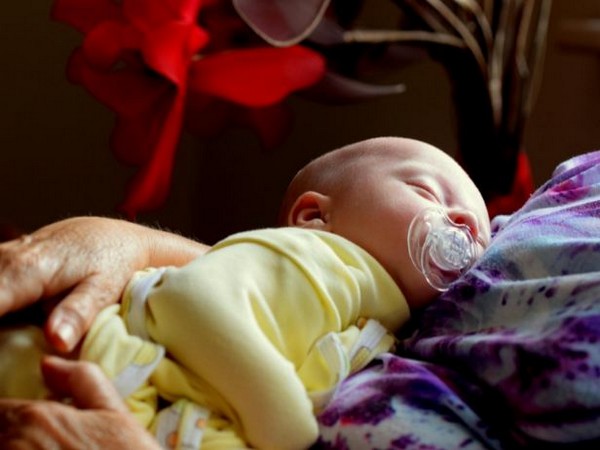 Washington [US], May 2 (ANI): Why the transmission of HIV infection from mother to baby in womb occurs in some cases but not others has long been a mystery, but now a team of researchers from Weill Cornell Medicine and Duke University has found an important clue about the same which also gives treatment hints to eliminate the infection in infants.

In a study published in the medical journal PLoS Pathogens, the researchers found evidence linking mother-to-child transmission of HIV to rare variants of the virus in the mother's blood that is able to escape broadly neutralizing antibodies (bnAbs) an emerging type of treatment that can be used to block a wide range of HIV strains. The scientists also found that these HIV variants tend to contain key genetic signatures.
The findings provide a possible way to predict whether mother-to-infant transmission of HIV will occur and point the way towards approaches that can help prevent such transmission, the researchers said.
At the same time, the results hint that treating HIV-positive pregnant women or new mothers with bnAb therapies might have the unintended effect of promoting the evolution of variants that can resist these therapies and thus raising the risk of mother-to-child transmission.
"Our findings suggest that vaccines or treatments for HIV-infected pregnant and nursing women should be designed to prevent the development of these resistant variants, in order to reduce the chance of HIV transmission to the child," said senior author Dr Sallie Permar, chair of paediatrics and Nancy C. Paduano Professor in Pediatrics at Weill Cornell Medicine and paediatrician-in-chief at NewYork-Presbyterian/Weill Cornell Medical Center.
Mother-to-newborn transmission of HIV has been puzzling because, even when the mother is infected and untreated, the chance of transmission to the child is less than 50 per cent.
Scientists have hypothesized that the factors determining whether transmission occurs lie in the mother's immune system and/or in the HIV variants circulating in her blood. But zeroing in on the source of transmission risk has been challenging, not least because antiretroviral (ART) drug treatment, which is now standard for most HIV-infected individuals, would be likely to confound the results of any study of current patients.
Dr Permar and her colleagues circumvented this problem by evaluating a collection of samples from a study of HIV-infected mothers and their infants conducted three decades ago, before the age of ART.
In one set of experiments, Dr Permar's team isolated the HIV variants that had been transmitted from the mothers to their infants and found that these transmitted HIV variants--compared to non-transmitted variants from the mothers' blood--were about 30 per cent less sensitive to the mothers' plasma--the antibody-containing fraction of the mothers' blood.
In other words, the difference between transmission and non-transmission seemed to be due at least in part to HIV variations that allow escape from maternal antibodies.
Detecting those HIV escape variants in the mothers was not a simple matter. The researchers observed that HIV variants in transmitting mothers and HIV variants in non-transmitting mothers were, on the whole, just as sensitive to maternal plasma.
Ultimately the researchers analyzed genetic sequences in the HIV variants from transmitting and non-transmitting mothers and found that several genetic signatures were associated with transmission vs. non-transmission.
Most of these signatures were also associated with the rare ability to escape neutralization by some or all of a panel of bnAbs. The latter are antibodies that were originally isolated from a few HIV-positive individuals, are known to block a wide variety of HIV strains and are being developed as HIV therapies.
"This finding suggests that the presence of broadly neutralizing antibody-escape variants in the blood of HIV-infected mothers is a predictor of higher transmission risk to newborns," Dr Permar said.
That in turn indicates that any vaccine or treatment given to HIV-infected pregnant or nursing mothers, as an adjunct to ART to reduce transmission risk, needs to be effective against HIV variants that can escape these special antibodies.
Moreover, the results suggest that simply vaccinating mothers to elicit broadly neutralizing antibodies, or delivering mixes of therapeutic bnAbs, might in some cases cause more mother-to-child transmission--if the presence of the potent antibodies promotes HIV evolution towards resistant variants.
Dr Permar and colleagues are now working to understand better how to address this problem.
Approaches worth investigating, Dr Permar said, include giving pregnant, HIV-infected women high-dose, short-term combination bnAb therapy containing multiple types of these antibodies, in order to minimize escape risk; and also delivering a multi-bnAb therapy directly to babies at birth in the hope of curing any HIV infection that occurs during delivery and preventing subsequent HIV infection via breastfeeding. (ANI)