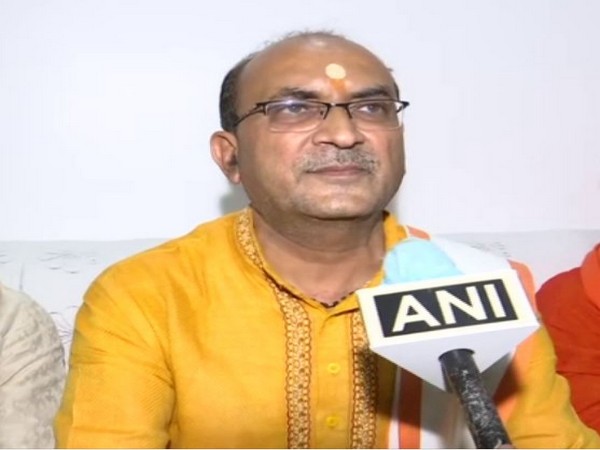 Ayodhya (Uttar Pradesh) [India], August 2 (ANI): A brick made of Brij area soil will be among the bricks to be used for 'bhoomi pujan' on August 5 for the grand temple's construction in Ayodhya, said Saurabh Gaur, president of Vrindavan-based Dharam Raksha Sangh (DRS).

While speaking to ANI, Gaur said that Mahant Nritya Gopal Das, president, Ram Janambhoomi Teerth Kshetra Trust has promised him to use "Rajat Shila" on August 5.
"We have handed over Rajat Shila to Nritya Gopal Das. This is made up of the sacred soil of Brij kshetra and water from the Yamuna river. We have given us this brick back after due rituals by saints and people of the Mathura region. Nritya Gopal Das ji has promised us to use the brick," Gaur said.
"We are fortunate enough to get the chance to bring this brick which will be used in 'bhoomi pujan'. Whenever Brij people will visit Ayodhya they will feel a connection with this spot," he added.
Preparations, including a cleanliness drive and sanitisation, are underway in Ayodhya ahead of the foundation laying ceremony of the Ram Temple on August 5.
According to the police, the security arrangements for the foundation stone-laying ceremony have been put in place and people are being requested to refrain from gathering at a place.
Several areas in Ayodhya are being illuminated with diyas (earthen lamps) and colourful lights. According to potters in the state, around 1.25 lakh diyas were ordered for the highly anticipated ceremony on August 5.
The Prime Minister is scheduled to lay the foundation stone of the Ram Temple in Ayodhya on August 5, according to Mahant Nritya Gopal Das, the president of the Sri Ram Janmabhoomi Teertha Kshetra Trust.
The construction of the Ram temple will begin after the ceremony to lay the foundation stone in which Chief Ministers of several states, Ministers from the Union Cabinet and RSS chief Mohan Bhagwat are also likely to participate. (ANI)