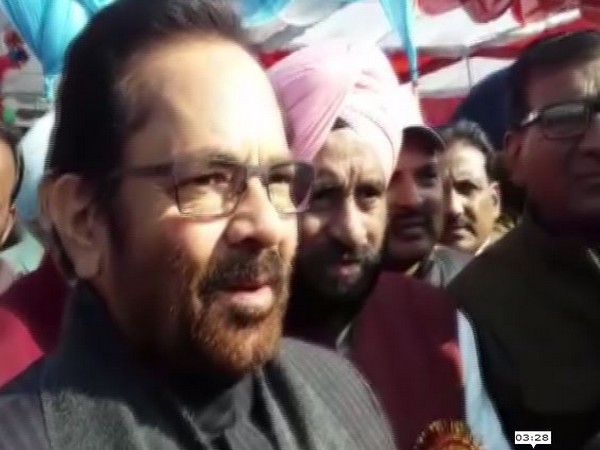 Rampur (Uttar Pradesh) [India], Feb 2 (ANI): Union Minister of Minority Affairs and Bharatiya Janata Party (BJP) leader Mukhtar Abbas Naqvi on Sunday said that a bullet has no place in a democracy while responding to a question on two separate firing incidents that took place in Jamia and Shaheen Bagh areas of Delhi.

"A bullet has no place in a democracy, only dialogue has a place in a democracy,"
The Minister also said that people are being misled against the Citizenship Amendment Act (CAA) and that they should try to understand the truth.
"I want to make an appeal to the people protesting against CAA, that they try and understand the truth. People who have tried to mislead them (anti-CAA protestors), they have political motives behind it, such people are trying to use innocents to spoil the atmosphere," he said.
He further added that there is provision for people from other countries who want Indian citizenship and said, "Things can be solved peacefully and the President himself during the joint address of Parliament said CAA is not meant for taking away citizenship. If people from other countries want Indian citizenship then we have such provisions as well."
The CAA grants citizenship to Hindus, Sikhs, Jains, Parsis, Buddhists and Christians fleeing religious persecution from Pakistan, Afghanistan, and Bangladesh if they entered India on or before December 31, 2014. (ANI)