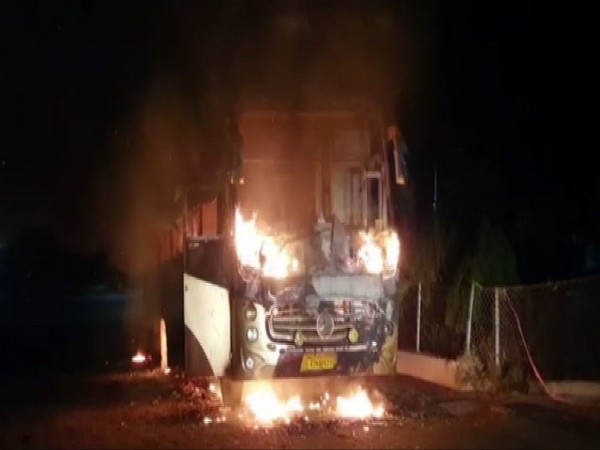 Kheda (Gujarat) [India], May 23 (ANI): A bus carrying 25 passengers caught fire on Ahmedabad-Vadodara expressway near the Makwa village of Gurajat, in the early hours of Saturday.

The alert driver noticed the fire when the bus arrived at a petrol station to refill its diesel tank and moved the vehicle out of the station, where the fire grew further. The bus caught fire due to overheating while it was proceeding towards the petrol station, passengers onboard said.
Fire brigade and local police authorities were informed and reached the spot following which petrol station staff helped passengers deboard the bus while fire brigade personnel put out the fire.
"No one was injured and all the 25 passengers and 3 staff members were rescued along with their luggage," said a passenger.
The bus was travelling from Bengaluru to Jodhpur, taking people who were stuck in Bengaluru amid the nationwide lockdown imposed due to COVID-19. (ANI)