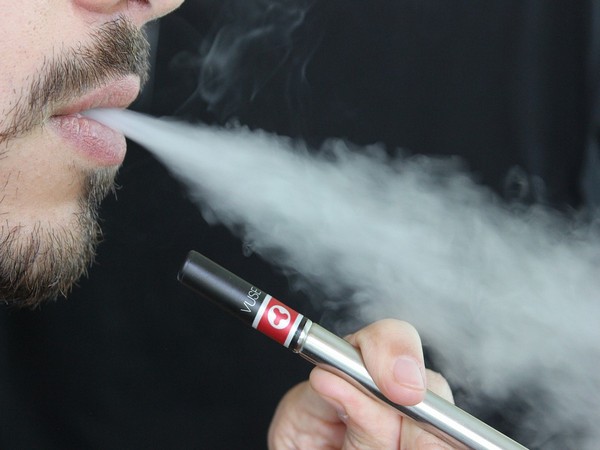 New Delhi [India], Sept 18 (ANI): In a major initiative, the Union Cabinet on Wednesday approved an ordinance for a comprehensive ban on e-cigarettes which covers their production, manufacture, import, export, transport, sale, distribution, storage and advertisement.

The ban includes e-hookahs and online sale and advertisement of e-cigarettes.
Violations are a cognisable offence punishable with an imprisonment of up to one year or fine up to Rs 1 lakh or both for the first offence and imprisonment of up to three years and fine up to Rs 5 lakh for a subsequent offence.
Storage of electronic-cigarettes shall also be punishable with imprisonment up to 6 months or fine up to Rs 50,000 or both.
Briefing reporters after the cabinet meeting, Finance Minister Nirmala Sitharaman and Information and Broadcasting Minister Prakash Javadekar said that the decision to prohibit e-cigarettes will help protect people, specially the youth and children, from the risk of addiction.
They said enforcement of ordinance will complement government's efforts towards tobacco control and reduction in associated economic and disease burden.
The Prohibition of Electronic Cigarettes (production, manufacture, import, export, transport, sale, distribution, storage and advertisement) Ordinance, 2019 will be implemented after approval by President Ram Nath Kovind.
Sitharaman said the government will bring a bill to replace the ordinance in the next session of parliament.
She said data with the government was largely based on the US experience.
"In the US, there has been 77.4 per cent growth among school students who are in 10th and 12th level and surprisingly even middle school students have become victims or are taking to e-cigarettes. Among the middle school students, the growth in e-cigarettes is about 48.5 per cent," she said.
She said an estimated three million children in the US were regular users of e-cigarettes and in 4-5 years between 2011 and 2015-16, there has been 900 per cent growth of e-cigarettes in the US.
The minister said there have been ground reports in India about use of e-cigarettes and probably it was seen as some kind of style-statement and people did not mind trying it.
The minister said that e-cigarettes got promoted initially as a way in which people can get away from the habit of smoking cigarettes.
The ordinance provides that owners of existing stocks of e-cigarettes on the date of its implementation will have to suo moto declare and deposit the e-cigarette stocks with the nearest police station.
Sub-inspector of Police has been designated as the authorized officer to take action under the Ordinance.
The central or state governments may also designate any other equivalent officer as an authorised officer for enforcement of the ordinance.
Electronic-cigarettes are battery-operated devices that produce aerosol by heating a solution containing nicotine, which is the addictive substance in combustible cigarettes.
These include all forms of Electronic Nicotine Delivery Systems (ENDS), Heat Not Burn Products, e-Hookah and the like devices.
The products come with attractive appearances and multiple flavours and their use has increased exponentially and has acquired epidemic proportions in developed countries, especially among youth and children.
ANI had reported on September 10 that the Union Cabinet is likely to take up e-cigarettes ban through Prohibition of E-cigarettes Ordinance 2019.
The draft ordinance was sent to a Group of Minister's (GOM) for examination.
Few months back, the Indian Council for Medical Research released a white paper based on over 200 international studies demanding the complete ban on e-cigarettes. It stated that nicotine is considered one of the most addictive substances which poses health risks.
In a white paper, the ICMR said e-cigarettes adversely affect the cardiovascular system, impair respiratory immune cell function and airways in a way similar to cigarette smoking and is responsible for severe respiratory diseases.
"This is a very welcome step by Government. We had been fighting for this for last three years. But it's not the time to relax. We will have to be on toes otherwise more spurious products may enter the market through illegal means. Enforcement agencies like Police , municipalities, food safety department, drug inspectors, revenue department and health department have to be very vigilant to enforce this ban," said Dr S K Arora, Additional Director Health in Delhi government.
Balram Bhargava, Director General of ICMR said that use of e-cigarettes was becoming an epidemic around the world with its harmful health effects to users as well as passive exposure.
"If appropriate interventions are not taken at the right time to prevent e-cigarettes use, it can lead to a public health disaster in India," he said.
However, Samrat Choudhary, Director, Association of Vapers India (AVI) opposed the move of the government and urged it to regulate e-cigarettes instead of imposing a total ban.
An official release said that the decision has come on the back of an advisory issued by the Government in 2018 to all states to consider banning e-cigarettes.
It said 16 states and one UT have already banned e-cigarettes in their jurisdictions.
Apart from ICMR, which has recommended a complete ban on e-cigarettes based on currently available scientific evidence, the WHO has also urged member countries to take appropriate steps including prohibiting these products.
The release said that these products are usually marketed as being safer alternatives for conventional cigarettes but such notions of safety are false.
"The available literature suggests that these products may act as gateway products to induce non-smokers, especially youth and adolescents, to nicotine-use, leading to addiction and subsequent use of conventional tobacco products. E-cigarettes are usually promoted by the industry as smoking cessation aids but their efficacy and safety as a quitting aid has not yet been established.
"Unlike the tried and tested nicotine and non-nicotine pharmacotherapies that are known to help people quit tobacco use, the WHO does not endorse e-cigarettes as cessation aids," it said.
Apart from nicotine, e-cigarettes may also be used for delivery of other psychoactive substances.
The release said that scientifically proven nicotine replacement therapies, without the risks associated with e-cigarettes, exist in the form of gums, lozenges and patches for those willing to quit tobacco use. (ANI)