Can compromise with other ideologies but not with that of RSS, BJP: Rahul Gandhi 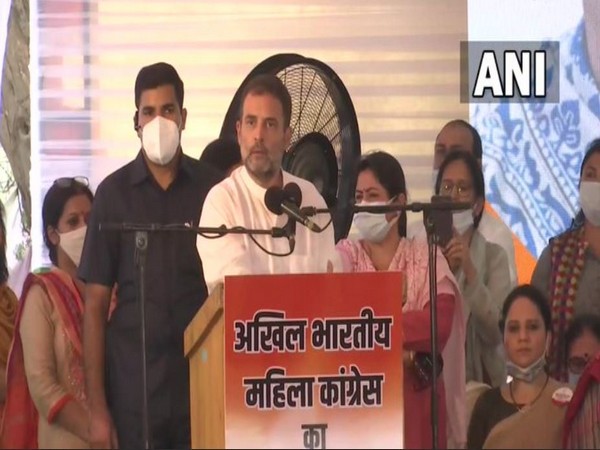 New Delhi [India], September 15 (ANI): Congress leader Rahul Gandhi on Wednesday said he can compromise with other ideologies but not with that of BJP and RSS.

Addressing the All India Mahila Congress foundation day programme in Delhi, Gandhi also accused RSS of "suppressing women" and said Congress gives them a platform.
He claimed BJP-RSS people say they're Hindu party and said Mahatma Gandhi is the person in the last 100-200 years who understood the Hindu religion and practised it.
"It is Diwali time, you have seen Lakshmijii idol, why do you worship her? Lakshmi is that power, Lakshmi means goal (lakshay). What is Durga? Durga is the power, the word Durga comes from the fort," he said.
"They (BJP) call themselves the Hindu party and attack Lakshmi and Durga all over the country. Wherever they go, somewhere they kill Lakshmi, somewhere they kill Durga. They use the Hindu religion but they are only brokers of the Hindu religion and not Hindus," he alleged.
Rahul Gandhi said two-three women can be seen around Mahatma Gandhi in some of his pictures.
"Have you seen a picture of Mohan Bhagwat with any woman? That's because their organisation suppresses women and our organisation gives them a platform. Modi-RSS didn't make any woman PM of the country, Congress made," he said.
Rahul Gandhi said it "big question for us" what is the difference between Mahatma Gandhi's, Congress, Godse's, and Savarkar's ideologies.
"Congress has a different ideology than BJP and RSS. As a Congress worker, I can compromise with other ideologies but not with BJP and RSS' ideology," he said.
"BJP-RSS people say they're Hindu party. In the last 100-200 years, Mahatma Gandhi is the person who understood the Hindu religion and practised it. We recognise it and so do BJP and RSS people. If Mahatma Gandhi gave his entire life to understand the Hindu religion so why did Godse kill him. It is a contradiction and you have to think about it," he added.
During the programme, Rahul Gandhi also unveiled the new logo of the All India Mahila Congress. (ANI)