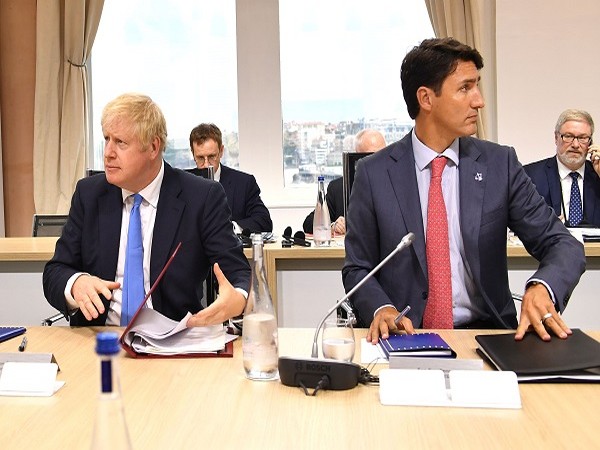 "Now we get to continue to work on a bespoke agreement, a comprehensive agreement, over the coming years that will really maximise our trade opportunities and boost things for everyone," Trudeau said, reported CBC News.
"Free trade is an important part of the way that we're going to bounce back from COVID, but I also think that Canada and the UK share a perspective about building back greener," said Johnson, who also congratulated Trudeau's steps to get Canada to net-zero carbon emissions by 2050.
CBC News reported that the Canada-United Kingdom Trade Continuity Agreement extends the elimination of tariffs on 98 per cent of goods exported between the two countries and sets the stage for negotiations toward a permanent and more ambitious deal in the new year.
According to a release from the British government, the deal could include the potential to go further in areas like digital trade, the environment and women's economic empowerment.
Following the UK's exit from the European Union (EU) last winter, the two countries agreed to let the Comprehensive Economic and Trade Agreement (CETA), which is the bilateral trade deal in effect between Canada and the EU since 2017, continue to apply to Canada-UK trade until the end of 2020.
Negotiating a new comprehensive bilateral trade agreement between the two countries, that could be fully ratified and in place before January 1, 2021, was difficult because the British did not have jurisdiction over their own trade affairs until their exit from the EU was complete. Instead, the two sides agreed to roll over the CETA in a short-term transitional agreement, replicating most of the existing language and renegotiating only what was required to make it fit UK-only trade.
As the negotiations have been concluded, the deal must be approved by both governments. In Canada's case, the negotiations must be approved by Parliament.
Meanwhile, Canada's business community offered a mixed reaction shortly after the deal was announced, welcoming the economic certainty the interim deal offered while asking for more specifics on the arrangement, reported CBC News.
"We call on the Canadian and British government to publish details of the agreement so that businesses can understand all the practical details," said Mark Agnew, international policy director for the Canadian Chamber of Commerce.
Goldy Hyder, president of the Business Council of Canada, said he looked forward to reviewing the details of the agreement and that he believed in a future opportunity to enhance the bilateral trade and investment ties even further under a more comprehensive pact. (ANI)