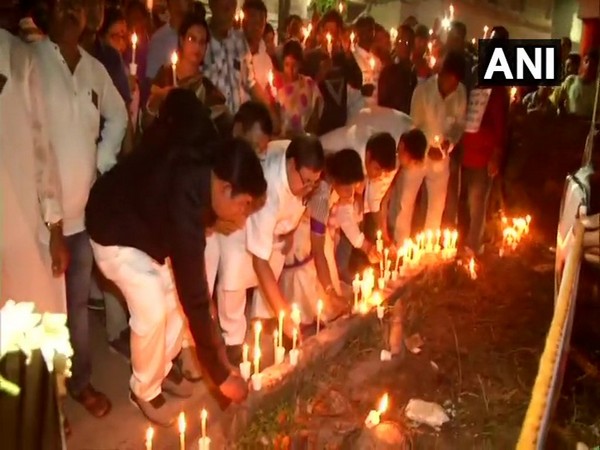 Murshidabad (West Bengal) [India], Oct 12 (ANI): Locals here on Saturday held a candlelight march demanding justice in the murder case of a teacher, his wife and a child in the city.

Trinamool Congress MLA Shaoni Singha Roy was also present in the protest.
Three people including a child were murdered by unknown miscreants inside their house on October 8 in Jiyaganj area of Murshidabad.
The deceased were identified as Bandhuprakash Pal (35), his wife Beauty Mondal Pal (30) and son Angan Bandhu Pal (8).
Reacting to the same, West Bengal BJP chief Dilip Ghosh said, "We have sought time from the President and the Union Home Minister. When they will give us time, our delegation of representatives will apprise them of the situation in Bengal."
BJP and RSS leaders have said that Bandhuprakash was an RSS worker, a claim which West Bengal Police has denied.
The incident came to light after the neighbours found the bodies inside their house and informed the police.
The police have detained four people in the case and interrogating them. (ANI)