CCP wants a different theory of international relations that will not create freedom: Pompeo 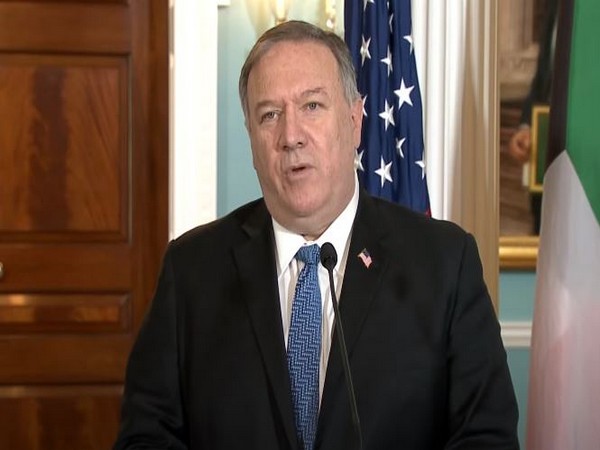 Washington [US], January 13 (ANI): As relations between the United States and China continue to worsen, Secretary of State Mike Pompeo on Tuesday said that the Chinese Communist Party (CCP) wants "a very different theory" of international relations that's controlled in a way that won't create security, freedom and prosperity.

Pompeo, in an interview with Hugh Hewitt of The Hugh Hewitt Show, said that all Washington asks is that the CCP fulfills the promises that "it has made to not only the United States but to the world for all these years."
"I think the world, and that includes the American people, will continue to demand that the United States secure freedoms for them, and that includes pushing back against the challenge of our time. That is the challenge of the Chinese Communist Party and its capacity and intention to expand its influence and ultimately deliver a world that is very different, one not governed by the rule of law, by respect for sovereignty, all the things that the world has come to know in the post-World War II environment," he said in the interview as quoted by the transcript provided by the Department of State.
"The Chinese Communist Party wants to upend with a very different theory of international relations, one dominated by the East, one controlled in a way that won't create more security, freedom, more prosperity," Pompeo added.
When asked about whether President-elect Joe Biden would stand up to the CCP, the top US diplomat said that he was confident that the American people including Biden would make sure that America remains the country it has for the last 240-plus years.
"I am confident the American people will demand that whoever is leading their country, President-elect Biden included, respond to that in a way that continues to make sure that America remains the country it has for the last 240-plus years, and that the world continue to operate under a set of rules that are based in human rights, based in the law, based in respect for sovereignty," he said.
Pompeo lashed out at the CCP for refusing to allow anybody to get access to the information they need to figure the origins of COVID-19 adding that he was not optimistic about the World Health Organization's (WHO) visit to China.
"It sounds like yesterday or the day before they may finally have let the World Health Organization enter. I hope, but I'm not optimistic, that they will actually let them do the work that needs to be done: see records, see the lab, see the original work that was done, see - talk to, interview all of the people, not with minders around, but in a situation where those people would be free to speak their mind. I hope that investigation can be thorough," he said.
When asked about whether he would accept any other alternative explanation that COVID-19 originated from Wuhan, he said that the CCP "has offered not one, not two, but at least three alternative theories for where this began."
"They continue to attempt to obfuscate. Everything that we have seen indicates that this began not only inside of China but at Hubei province, Wuhan," he added.
On the subject of whether China owes reparations to the world, Pompeo said that there "will be hundreds and hundreds of thousands" more people continue to live in poverty as a direct result of the economic challenges that the 'Wuhan virus' has foisted upon the world.
"I think the world will respond to this in a way that recognizes what the Chinese Communist Party did by delaying their activation of the promises that they had made to the World Health Organization, and there will be costs that are attached to that as a direct result of the things that the Chinese Communist Party did," he said.
Pompeo, who has been critical of the world health body, said it was corrupted by China's influence, "and bought cheap." "WHO investigators still can't access Wuhan - a year after the first cases were reported #ChinaLiedMillionsDied," he said in a tweet on Monday.
Under the Trump administration, ties between the two countries had deteriorated over issues such as human rights violations in Xinjiang, encroachment on the special status of Hong Kong, accusations of unfair trade practices by Beijing, lack of transparency concerning the pandemic and China's military aggression in various parts of the world. (ANI)