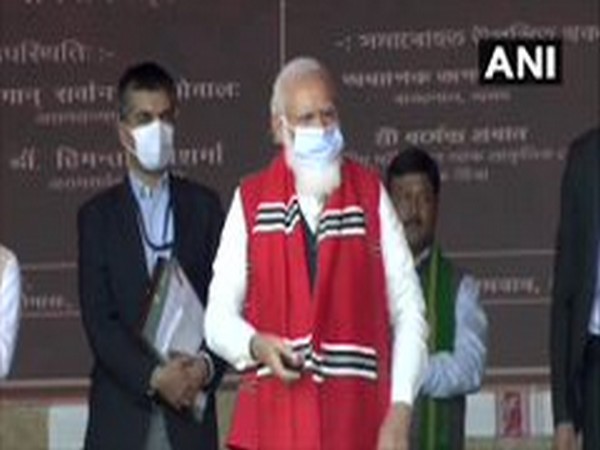 Dhemaji (Assam) [India], February 22 (ANI): Prime Minister Narendra Modi on Monday said that the Centre and Assamese government are working collaboratively for the development and balanced growth of the state, adding that the previous governments have been giving neglecting the region.

"Centre and Assam government working collaboratively to develop State infrastructure and provide balanced growth which is one of the major factors of this development was Assamese infrastructure. Despite the State having great potential, former governments gave it 'sautela' (step-motherly)treatment by overlooking development in various sectors, PM Modi said as he inaugurated various projects in the Silapathar and Dhemaji in poll-bound Assam."
Accusing the governments that ruled India for decades since Independence for neglecting Assam and North-East, he said, "Despite having sufficient power in the North Bank, previous governments have had a step-motherly behaviour with this area. Be it connectivity, hospitals, educational institutes, development, these were not visible in the priorities of the previous governments. Sabka saath, sabka vishwas, sabka vikas. Our government has been working on this mantra. Sarbananda's govt has eradicated this discrimination."
"This is my honour that I have had the opportunity to visit Dhemaji and meet all you people for the third time. Every time, the belongingness and the blessings of these people drives me to work harder for Assam and North-east and do something new," the Prime Minister said as he assured that he will visit Assam and other poll-bound states as many times as possible before elections are announced.
Recalling his trip to the Indian Agricultural Research Institute, he said: "I had said then that the North -East will become the new engine of India's growth. Today, we are witnessing this vision in front of our eyes."
The work on the Bogibeel bridge, which has been waiting for a long time, has been swiftly completed by our government. The Broad Gage railway line in the North Bank was also delivered after our government came in power.
The Prime Minister also informed that the second Kaliabhomora Bridge on the Brahmaputra will increase connectivity here (Assam) and work related to this is going on at a quick pace and the work on four lanes of national highways is also being done quickly.
"Assam has everything that is enough for every Assamese. We just need to ensure that the double-engine of development that is already in place is strengthened. I assure the people of Assam that the speed of development will be increased," he said as he addressed a massive gathering after dedicating to people, inaugurating and laying the foundation of a slew of projects worth over Rs 3,300 crore.
He further informed that energy and education infrastructure worth Rs 3,000 crores has been gifted to Assam, adding that projects such as engineering colleges, refineries, tank farms and gas compression stations will strengthen the state's identity in terms of education and energy.
"Assam's tea, tourism, handloom and handicraft will strengthen the State's self-reliance," he remarked.
The Prime Minister dedicated INDMAX Unit at Indian Oil's Bongaigaon Refinery, Oil India Limited's Secondary Tank Farm at Madhuban, Dibrugarh and a Gas Compressor Station at Hebeda Village to the nation. He also inaugurated the Dhemaji Engineering College and laid the foundation stone for Sualkuchi Engineering College.
Later, he will inaugurate several railway projects in Hooghly, West Bengal.(ANI)