Centre trying to suppress rights of States to hide its shortcomings: AAP on Centre's BSF order 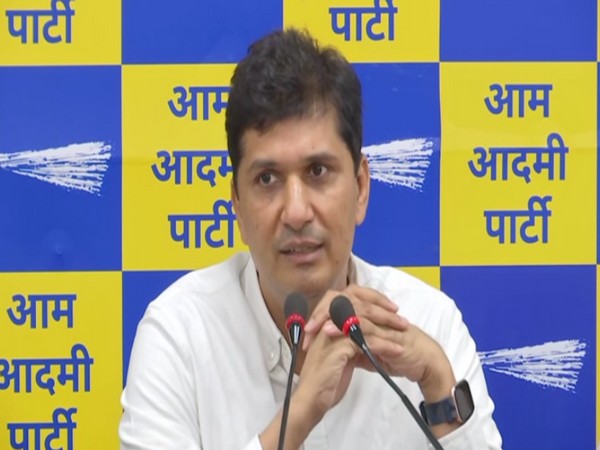 New Delhi [India], October 14 (ANI): Aam Aadmi Party on Thursday alleged that the Centre is trying to suppress the rights of the States to hide its own shortcomings by giving additional powers to the Border Security Force (BSF) in the border states.

AAP Spokesperson Saurabh Bhardwaj said, "By increasing the jurisdiction of BSF in the border states, the Centre is suppressing the rights of the states to hide its own shortcomings. This is a technical matter relating to national security and states and the Centre should talk together for the internal security of the nation. The Centre has not been able to stop terrorism and now it is running a dictatorial rule without taking any side in confidence, without any dialogue," Bhardwaj said.
As per the fresh order, the BSF, which was only empowered to take action up to fifteen kilometers in the states of Punjab, West Bengal, and Assam, has now been authorised to spread its jurisdiction up to 50 km without any hurdle or further permission either from central or state governments.
On China's objections to Vice President Venkaiah Naidu's visit to Arunachal Pradesh, he said that India's issues with China have been there for a long time and they need resolution.
"Issues have escalated to a point where China is raising objections against Naidu roaming in his own country. This demands some changes in our foreign policy," he added.
Beijing on Wednesday objected to Vice President Venkaiah Naidu's recent visit to Arunachal Pradesh, saying that it is firmly opposed to the Indian leader's visit to the state as it has never recognised it.
Naidu visited Arunachal Pradesh on October 9 and addressed a special session of the state Assembly.
Responding to a media query, Ministry of External Affairs spokesperson Arindam Bagchi rejected remarks of Chinese Foreign Ministry spokesman Zhao Lijian relating to Naidu's visit.
On the coal crisis in the country, he said that NTPC should communicate more openly with the states on coal crisis.
"NTPC had told states that they would give us this much power supply but the demand was higher than that. Now they are saying that the crisis has subsided and coal has arrived. States have increased their demand again. But now that weather is getting cooler, demand for electricity will be less," he added.
Amid concerns about a power crisis in the country, Union Minister of Coal Pralhad Joshi on Thursday assured that there would be no shortage of coal for electricity production.
Some chief ministers from across the country have flagged the power crisis that might arise in their respective states due to the coal shortage in power generation plants. These states include Delhi, Punjab and Chhattisgarh. (ANI)