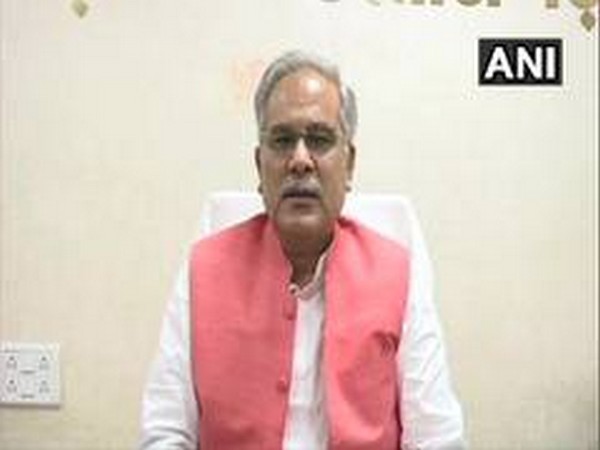 Raipur (Chhattisgarh) [India], June 11 (ANI): Chhattisgarh Chief Minister Bhupesh Baghel on Thursday transferred an amount of Rs 3.7 crores to the accounts of Gauthan committees, self-help groups and dung vendors under the Godhan Nyay Yojana in a virtual program organised at his residence office on Thursday.

The amount transferred includes a dividend of Rs 2.45 crores to Gauthan committees and self-help groups. Under Godhan Nyay Yojna, so far, Rs 95.94 crores have been paid in lieu of cow dung purchased in Gauthans, which has benefited 1,68,531 livestock farmers and villagers.
On this occasion, the Chief Minister also launched Godhan Super Compost mobile app.
Baghel said that Godhan Nyay is a scheme with multi-level benefits.
"This scheme is proving beneficial for all the sections of the society. Godhan Nyay Yojna is promoting protection of livestock, encouraging animal husbandry, protection of crops and environment, extra income for villagers and livestock farmers from the sale of dung, employment and income to women self-help groups through manufacturing of vermicompost, super compost and other products and also organic farming," he added.
The Chief Minister said that the use of vermicompost and super compost manure is improving the quality and fertility of food grains and reducing the cost of cultivation, the benefits of which have started accruing to the farmers.
He said that vermicompost produced under the scheme is proving to be beneficial for the agriculture sector. He also directed to constitute and activate committees for the operation of all the Gauthans built in the state, so that its benefits could be availed.
Highlighting that Godhan Nyay Yojana is being discussed all over the country, Agriculture Minister Ravindra Choubey said that the Parliament Committee has recommended the Central Government to implement this scheme nationwide.
"Apart from procurement of cow dung worth Rs 96 crore from cattle rearers and farmers, nearly 80,000 women belonging to self-help groups have got employment under the scheme," he said.
Choubey said that at present only 5590 Gauthans are active, but construction of 9950 Gauthans has been approved. (ANI)