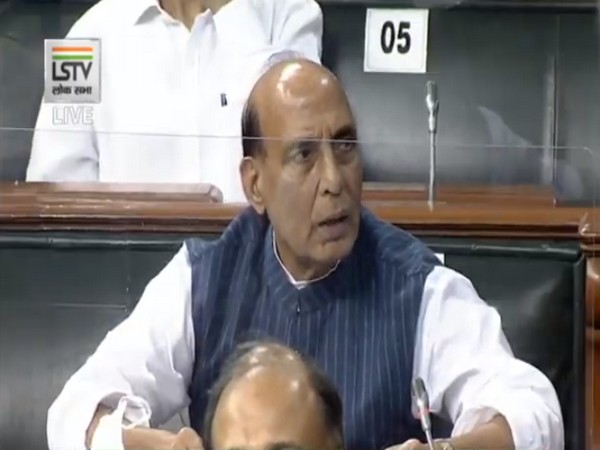 New Delhi [India], September 15 (ANI): Defence Minister Rajnath Singh on Tuesday said India has conveyed to China that its attempt to unilaterally alter the status quo along the Line of Actual Control (LAC) was unacceptable and noted that the Chinese actions reflect a "disregard" of various bilateral agreements between the two countries.

"Since April, we had noticed a buildup of troops and armaments by the Chinese side in the border areas adjacent to Eastern Ladakh. In early May, the Chinese side had taken action to hinder the normal, traditional patrolling pattern of our troops in the Galwan Valley area, which resulted in a face-off," Singh said in Lok Sabha in his statement on the situation on eastern border in Ladakh.
"Even as this situation was being addressed by the Ground Commanders as per the provisions of our bilateral agreements and protocol, in mid-May the Chinese side made several attempts to transgress the LAC in other parts of the Western Sector. This included Kongka La, Gogra and North Bank of Pangong Lake. These attempts were detected early and consequently responded to appropriately by our armed forces," he said.
Singh said India made it clear to the Chinese side "both through diplomatic and military channels that China was, by such actions, attempting to unilaterally alter the status quo. It was categorically conveyed that this was unacceptable".
The minister said the government has an elaborate and time-tested coordination mechanism amongst different intelligence agencies including intelligence units of the Central Police Forces and the three armed forces.
"The technical and human intelligence is continuously gathered in a well-coordinated manner. It is shared with the armed forces which help them in taking decisions," he said.
Singh said that even when discussions were going on the Chinese side again engaged in "provocative military manoeuvers" on the night of August 29-30 in an attempt to change the status quo in the South Bank area of Pangong Lake.
"But yet again, timely and firm actions by our armed forces along the LAC prevented such attempts from succeeding. As is clear from these events, the Chinese actions reflect a disregard of our various bilateral agreements," Singh said.
He said that the two sides have agreed to maintain peace and tranquillity along the LAC without prejudice to their respective positions on the alignment of the LAC as well as on the boundary question under bilateral agreements.
The minister said while no one should doubt "our determination to safeguard our borders, India believes that mutual respect and mutual sensitivity are the basis for peaceful relations with neighbours"
"As the members are aware, in the past too we have had situations of prolonged stand-offs in our border areas with China which have been resolved peacefully. Even though the situation this year is very different both in terms of scale of troops involved and the number of friction points, we do remain committed to the peaceful resolution of the current situation. At the same time, the House can be assured that we remain prepared to deal with all contingencies," he said. (ANI)