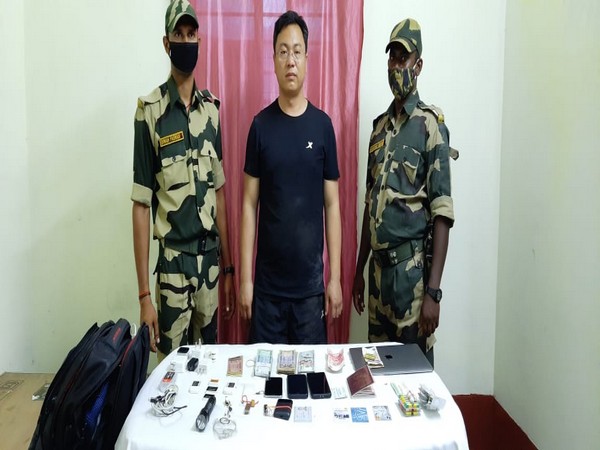 As per a statement issued by BSF, 35-year-old Chinese national, Han Junwe, used to hide the SIM cards in undergarments and send them to China.
"Han Junwe has been a wanted criminal and upon thorough interrogation, shocking facts have come to fore that he has taken around 1,300 Indian SIMs to China using fake documents. Through his associate, he used to hide SIM in undergarments and send them to China," BSF said.
On Friday, BSF informed that a search of the electronic equipment belonging to Junwe suggested that he was working in India for a Chinese intelligence agency.
"In the electronic equipment found from Han Junwe, many facts can be found that he was working in India for which Chinese Intelligence Agency," the statement said, adding that when this will be investigated in depth many 'startling' details may surface.
The BSF had arrested him on June 10 while he was trying to cross the Indo-Bangladesh international boundary illegally. On being asked to stop, Junwe tried to run away but was chased and caught by BSF personnel.
He was then taken to the Border Out Post Mohadipur for questioning.
Interrogation and his passport revealed that he had gone to Dhaka, Bangladesh on June 2 on a business visa, where he stayed with a Chinese friend. On June 8, he reached Sona Masjid in Bangladesh's Chapai Nawabganj district.
While trying to enter inside the Indian territory on Thursday morning, he was caught by BSF troops.
"When troops questioned him, he didn't give a satisfactory reply. Immediately agencies concerned and the local police were informed. Agencies are questioning him," said BSF sources.
During interrogation, Junwe revealed that he had previously visited India four times: Hyderabad in 2010, and Delhi and Gurugram thrice after 2019. He also said that he has a hotel in Gurugram called 'Star Spring'.
He further said that when he had gone to his hometown of Hubei, one of his business partners, namely Sun Jiang, used to send him 10-15 numbers belonging to Indian mobile phone SIM cards and after a few days, they are received by him and his wife.
But a few days ago, his business partner was caught by ATS in Lucknow and he mentioned Junwe and his wife. A case was registered against them in ATS Lucknow due to which he was not able to get an Indian visa in China.
He, however, managed a visa from Bangladesh and Nepal, so that he could come to India.
BSF had said that a thorough search of the intruder produced one laptop, two mobile phones, one Bangladeshi SIM cars, one Indian SIM card, two Chinese SIM cards, two pen drives, three batteries, two small torch lights, five Money Transaction Machines, two ATM/Master Card, US Dollars, Bangladeshi Taka and Indian currency. (ANI)