Chinese troops buildup first noticed in April, they tried to hinder patrolling pattern of our troops in May: Rajnath Singh 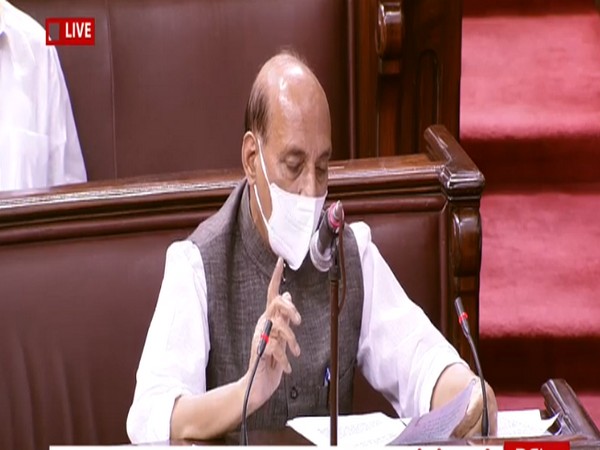 New Delhi [India], September 17 (ANI): The buildup of Chinese troops and armaments on the Eastern Ladakh border areas had been noticed since April, and in the following month they tried to stop the traditional patrolling route of our troops in the Galwan Valley, said Defence Minister Rajnath Singh on Thursday.

Addressing Rajya Sabha today, the Defence Minister said that in mid-May the Chinese troops had made several attempts to transgress the Line of Actual Control (LAC) in other parts of Western Sector, which includes Kongka La, Gogra and North Bank of Pangong Lake, which were detected and befittingly responded to by the Armed Forces.
"Since April, we had noticed a buildup of troops and armaments by the Chinese side in the border areas adjacent to Eastern Ladakh. In early May, the Chinese side had taken action to hinder the normal, traditional patrolling pattern of our troops in the Galwan Valley area, which resulted in a face-off," Singh said.
"Even as this situation was being addressed by the ground commanders as per the provisions of our bilateral agreements and protocol, in mid-May the Chinese side made several attempts to transgress the LAC in other parts of the Western Sector. These attempts were detected early and consequently responded to appropriately by our armed forces," he added.
The Defence Minister further said that through both diplomatic and military channels it had been made clear to the Chinese side that through these attempts they were"unilaterally attempting to alter the status quo", and that it was unacceptable.
Singh reiterated that the Galwan Valley clash had taken place as a result of the Chinese violating the process of disengagement decided at a meeting of senior commanders of the two sides on June 6.
Speaking about the present-day situation, he added that diplomatic and military engagements with the Chinese side have been maintained with three key principles in mind, "both sides should strictly respect and observe the LAC, neither side should attempt to alter the status quo unilaterally, and all agreements and understandings between the two sides must be fully abided by in their entirety."
Stating that the ongoing situation involves "sensitive operational issues", he said that the details could not be divulged in public as of yet.
He, however, added, "the situation this year is very different both in terms of the scale of troops involved and the number of friction points. We do remain committed to a peaceful resolution of the current situation. At the same time, we remain prepared to deal with all contingencies."
He also applauded the rapid deployment of Armed Forces, including Indo-Tibetan Border Police (ITBP), and said that the Centre has almost doubled the budget for infrastructural development in the border areas. This is being done to provide better logistical support for our armed forces, enabling them to be more alert in the border areas and respond more effectively where required.
The Defence Minister said that the situation would come to an end if the agreement reached between External Affairs Minister S Jaishankar and his Chinese counterpart in Moscow on September 10 there "implemented sincerely and faithfully by the Chinese side."
However, he also said that the Indian Armed Forces were ready and would surmount every challenge.
"We have a saying 'Victory resides in courage'. Our soldiers are a living symbol of restraint, bravery and valour. The reassuring visit by our Prime Minister has ensured that our commanders and soldiers that 130 crore people of India are with them. Special warm clothes, special tent for their living and adequate arrangement of all their weapons and ammunition have been made for them suitable to the extreme weather conditions," Singh said.
The two countries have been engaged in a standoff position since April-May timeframe and the Chinese have refused to vacate areas in the Finger area and other friction points in the Eastern Ladakh area.
Multiple rounds of talks have also failed to yield any significant result in defusing the tensions and now the Indian side has prepared itself for long term deployment in the high mountainous region. (ANI)