Chinese woman travels to India for an Indian wedding 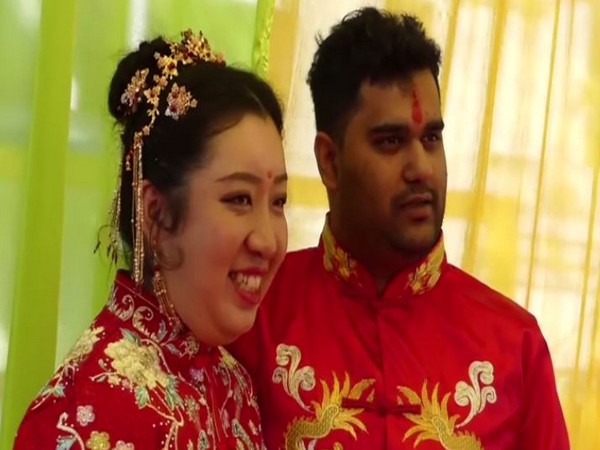 Mandsaur (Madhya Pradesh) [India], Feb 2 (ANI): Love knows no boundaries and flourishes regardless of nationality and religion. A case in point is an Indian man who recently tied the knot with a woman of Chinese nationality in Madhya Pradesh's Mandsaur.

Satyarth Mishra came across Ji Hao, a fellow student who is Chinese by birth when he was a student at Sheridon University in Canada, five years ago.
Sparks flew and their friendship turned into love and couple decided to get hitched after persuading their respective parents.
The marriage has been scheduled according to Indian rituals on February 2 in Satyarth's hometown.
The engagement ceremony took place the day before, for which the bride's parents flew in from China, reaching India on January 29. They were accompanied by Ji's three other close relatives.
The couple was seen dancing jubilantly to Indian tunes at the engagement they had been eagerly waiting for. The excitement of marriage was clearly visible on their faces and Satyarth's friends and relatives seemed awestruck at the sight of the new bride.
Members of the two families, though distinct from each other in nationality, race and religion expressed immense delight as they got acquainted with each other.
Satyarth told ANI that, both the families unanimously decided to carry out the engagement -- and subsequently the wedding -- in India according to Hindu rituals. A function was also decided to be held in China but the plan was dropped due to the coronavirus outbreak.
Revealing how the duo fell in love, Ji Hao said: "India is a nice country with nice people, and also nice food as well." She also said that she finds India "colourful and amazing".
Talking about the Indian culture, she said she felt that "India and China are traditional cultures, so we have something in common but there is also something different"
Satyarth's mother Jyoti seemed filled with joy on the special occasion. She became aware of her son's relationship when he returned to India in 2016 and opened up to her about it after which the family decided to get them married.
Talking to ANI, Jyoti added that Ji Hao's parents were having a great time and they keenly observed Indian traditions and customs. She was absolutely delighted to have such a lovely daughter in law.
The couple is set to return to Canada after the wedding and Ji Hao's parents would then head back to China. (ANI)