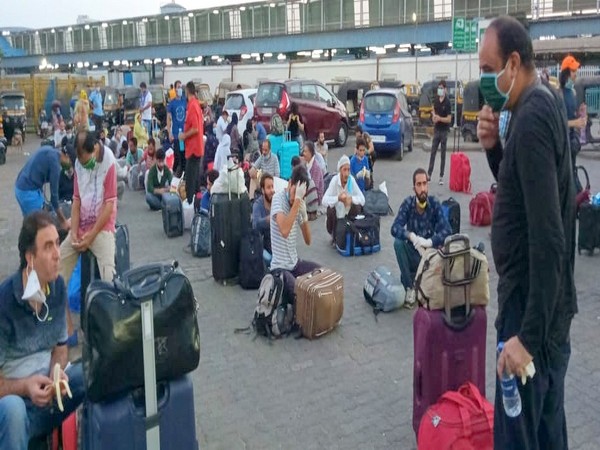 Jammu (Jammu and Kashmir) [India], May 23 (ANI): Amid the nationwide lockdown, close to 3300 Jammu and Kashmir residents, including 1200 students, have been sent back from Maharashtra through four Shramik Special trains in the past 10 days.

This makes Maharashtra the state where the highest number of special trains have been deployed for the evacuation of J-K residents.
In the latest batch, close to 600 stranded persons from J-K, including 200 students, left for Udhampur Railway Station from Bandra Terminus, Mumbai, on Saturday, according to a release by the government of the Union Territory.
The train carried Jammu and Kashmir residents, who were mostly stranded in the districts of Mumbai City and Mumbai Suburban. Those ferried included patients, traders, handicraft vendors, laborers, and employees from banks, the private sector and the government.
There are also residents from UT of Ladakh on this train who were stranded in Mumbai and its adjoining areas.
In the south-western region, around 800 J-K residents including 35 students were evacuated by Special Shramik Train from Kerala on May 20, 2020.
Similarly, around 1800 J-K residents, including 17 students were evacuated by 2 Special Shramik Trains from Goa on May 10 and 12.
The total number of J-K residents evacuated from three states of Maharashtra, Kerala, and Goa by seven Shramik Special Trains has reached 5700 including around 1250 students. (ANI)