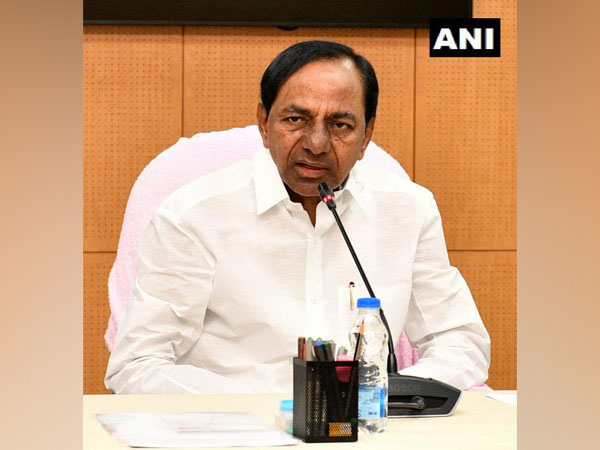 Hyderabad (Telangana) [India], July 23 (ANI): Telangana Chief Minister K Chandrashekhar Rao has instructed officials to be on high alert and monitor and ensure that people living in low lying areas do not face any hardships as the flood situation in the state has become alarming in wake of heavy rainfall.

He said immediate safety measures should be taken in Krishna and Godavari River catchment areas, the chief minister's office informed in a release.
Rao has instructed officials of all the departments to take preventive measures as the weather forecast stated that heavy rainfall will occur for the next two days in the state. He said people and officials should be on high alert till August 10.
In the backdrop of heavy rains occurring in the state along with the upper neighbouring States and on the measures already taken and to be taken in the Krishna and Godavari river catchment areas, Rao held a high-level review on Thursday at Pragathi Bhavan here.
During the meeting, the Chief Minister suggested to the officials that in Telangana there will never be famine situation and there is need to create strong machinery to face the flood situation in the state.
Speaking on the occasion, the CM said, "Set up an effective Flood Management Team with seven officers who know how to take safety measures for the people during the floods. Keep the records of the floods every year. Take preventive measures during the floods based on the record of the past floods. The Team should be constituted on a permanent basis."
He explained the awareness that these officers in the team should possess.
The officials explained to him about the flood situation, rainfall recorded at the Godavari catchment areas, the flood situation from upper areas of SRSP to Kadem, Yellampally, Swarna, Kaleswaram project jurisdiction areas and the situation on the upper Krishna areas. They informed that the flood is increasing in the Godavari. In this backdrop, necessary instructions were given to ministers from Nizamabad and Adilabad districts, collectors including the chief secretary.
The CM spoke to ministers and collectors from Nizamabad and Adilabad districts over the phone and issues several instructions on the safety measures.
He said senior officials should be sent immediately by an Army helicopter to supervise areas in Kothagudem, Eturu Nagaram and Mangampet.
The NDRF teams will be deputed to Armoor, Nirmal and Bhainsa areas immediately to take up the evacuation of people in the low-lying areas.
"Make arrangements for the shelter, clothes and food for the rehabilitated people and immediate measures should be taken to save people who were stranded in the floods in Adilabad, Mancherial, Asifabad districts," he told to officers.
The CM said, "There are very heavy rains occurring in the Western Ghats in Maharashtra, Mahabaleshwar recorded the highest 70 cms rainfall. Senior officials should be deputed to Nagarjuna Sagar and they should operate from there."
He directed that Nalgonda Irrigation CE should be deputed for the Nagarjuna Sagar dam safety monitoring and Wanaparthy CE for the Jurala project.
He has instructed the irrigation officials to release water from the Reservoir in a slow pace.
The CM inquired about the Musi river flood. He wanted measures to be taken for the safety of people living in low-lying areas in Hyderabad.
He urged people in the state to exercise restraint and be alert of the flood situation. (ANI)