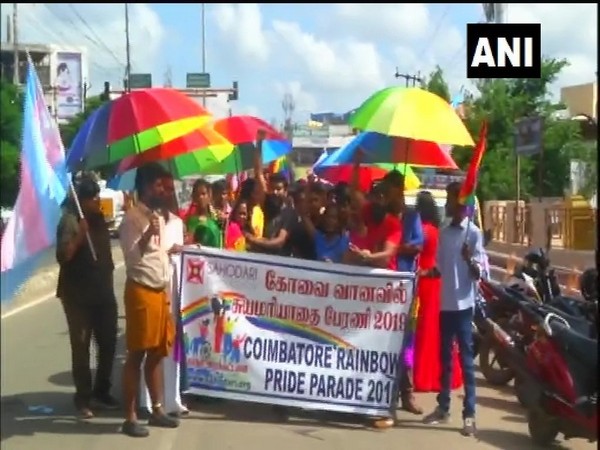 Coimbatore (Tamil Nadu) [India], Oct 13 (ANI): The streets of Coimbatore were filled with colours on Sunday as the city hosted its first official Pride march.

The march which was organised by Sahodari Foundation was aimed at educating the people about the issues related to the LGBTQ community.

The volunteers, dressed up in casual attire were heard sloganeering and playing musical instruments during the pride march.

The Pride march commenced from the CCMC North Zone office and will conclude at the VOC Park East Gate in the evening.

In Siliguri last month, members of the Lesbian Gay Bisexual Transgender and Queer (LGBTQ) community celebrated the year anniversary of the Supreme Court's verdict on Section 377, which lifted a colonial-era ban on gay sex.

More than a hundred members of the community of the Black Rose Society in North Bengal took out a procession in which the members were seen dressed in bright coloured clothes and dancing on the roads. (ANI)