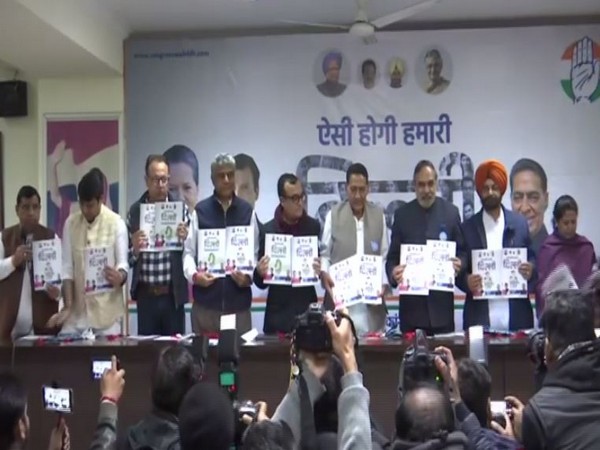 New Delhi [India], Feb 2 (ANI): The Congress party has pinned its hope on free electricity and water plank along with its opposition to the National Register of Citizens (NRC), the National Population Register (NPR), and the Citizenship Amendment Act (CAA) in their current forms, to win the Assembly polls in the city-state.

In its manifesto for the Delhi Assembly elections, which was released on Sunday, the Congress has promised free electricity up to 300 units and a further discount of 25 per cent to 50 per cent to be given on the consumption of 600 units of power.
A cashback of 30 paise per litre has been announced for spending less than 20,000 litres of water. The Congress has also announced Rs 72,000 per annum to 5 lakh poor families, Rs 5,000 to Rs 7,500 per month allowance to unemployed youth and Rs 5000 per month as pension to the elderly, differently-abled under the 'Justice Scheme'.
Apart from the main manifesto, a separate manifesto on the issue of environment has also been released, which promises that 25 per cent of the budget will be spent on improving traffic system and pollution management.
The Congress has promised to buy 15,000 electric buses and give a metro pass of Rs 300 per month to the students if voted to power. The elderly people, who are over 65 years, have been promised free travel in the metro.
In view of raging politics over the CAA, Congress has announced that this law will be challenged in the Supreme Court on behalf of the Delhi government if the Congress comes to power in the city-state.
The Congress promised not to implement NRC and NPR in the national capital. It has also said that a strong Lokpal Bill will be passed in the Assembly within six months of the formation of the government.
Along with the promise of free education for girls from nursery to PhD, 33 per cent reservation for women in jobs has been promised. It has also been announced to give Rs 1.10 lakh as 'shagun' in the marriage of a graduate girl of a poor family. Women's helpline 181 will be re-started. 100 Indira Canteens to provide food for Rs 15 per plate will be started.
In its manifesto, the Congress has also laid stress on health care and has promised to build 10 super speciality hospitals in the next five years. It has also promised to fill vacant posts in six months and confirm the temporary employees.
The Congress has further announced to regularise all unauthorised colonies and will spend Rs 35,000 crore on their development. The party has also announced to provide electricity to businesses and industries at the rate of Rs 6 per unit.
Chairman of Manifesto Committee Ajay Maken said: "The manifesto has been prepared with complete research. All the announcements that have been made will be implemented like other Congress-ruled states."
Delhi unit Congress president Subhash Chopra has claimed the people will vote in the name of development and the Congress will come to power.
Releasing the manifesto, senior Congress leader Anand Sharma had targeted the BJP, saying that the BJP is trying to polarise Delhi polls. "The election will be over but the atmosphere will be left completely spoiled," he said. (ANI)